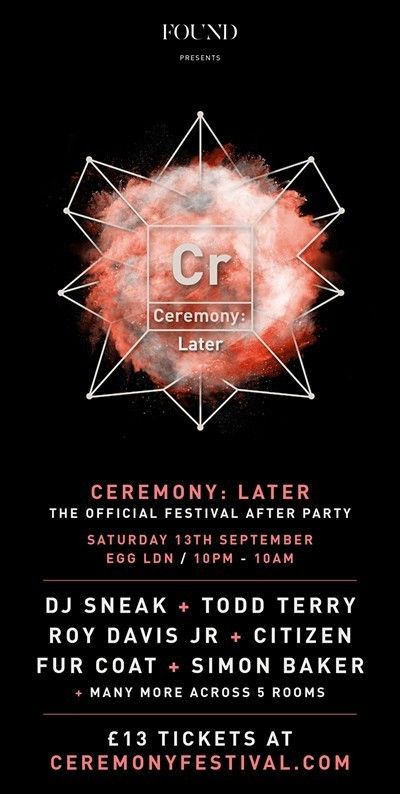 Found presents: Ceremony explores 360 degrees of underground dance culture. Continuing the party over at Egg London, Ceremony’s after party will run for a colossal twelve hours running between 10pm – 10am, across five rooms of music.

A refined cut of the Ceremony line up, the marathon after party will feature the firm FOUND favourite DJ Sneak, much loved for his gangster induced Chicago house that’s a sure fire winner on the dance floor. Also representing the US are the legendary Todd Terry and Roy Davis Jr, who will both serve up their unique take on house that seemingly paved the way for its predecessors. Crosstown Rebels mainstay Fur Coat will also feature, whilst Citizen, Simon Baker, Applebottom and The Menendez Brothers complete the line up. With very limited £13.50 tickets on sale now, the after party promises to be particularly special for those who like it longer, with Egg’s new outdoor garden terrace providing a stylish and unique party setting.