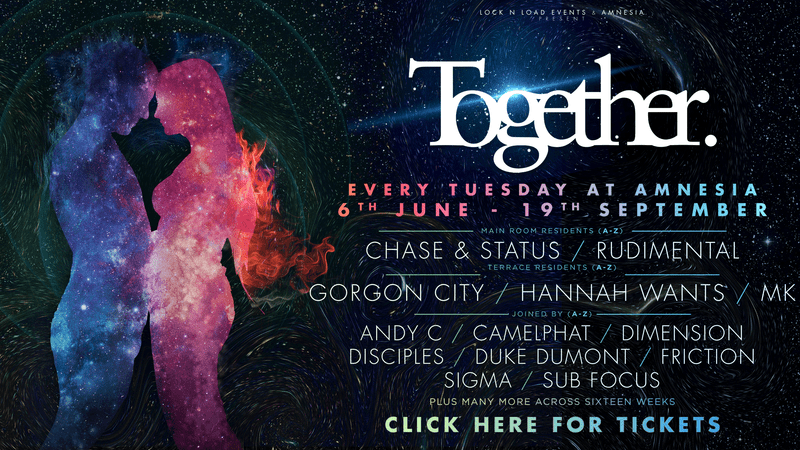 After an incredible six years on the island, Together is back once again at one of the world’s great clubbing institutions, Amnesia! A whirlwind few years has the brand cement itself as one of the leading nights on the white isle with a festival-based atmosphere engulfing the mammoth club every Tuesday night across the summer months.

Expect Together to take it to that next level in the summer of 2017 with stadium- sized headliners already committing themselves to Ibiza’s favourite Tuesday night party!

Chase & Status are amongst the most innovative and groundbreaking acts that have come out of electronic music in the recent history. Residents since day one, they have been instrumental in bringing the sounds of bass and drum & bass to the white isle for over six years. So much so that they have made the mammoth main room their own with thousands of Together enthusiasts flocking down to the club on a weekly basis to witness their incredible performances. Their constantly evolving sound coupled with their all-encompassing style has been them favourites all across the globe with them headlining festivals all across the globe. The summer of 2017 is set to be their most devastating yet as they return to the best club in Ibiza to lay down the law. We cannot wait them to lead the charge in the magnificent main room…Bring it on!

We are hugely excited to reveal that BRIT award winning, multi-platinum selling band Rudimental will be returning to TOGETHER once again. The winter months witness them sell out stadiums across the world and in the summer the band reside on the sunny island and bring their exhilarating show to the Together family. Their multiple number one hits have seen the band become a household name within the space of a few years and with the headlining London’s biggest dance music festival South West Four last summer, they have firmly joined the dance music elite!  The band will handpick a selection of their favourite artists to help curate their nights and trust us, you’re in for a treat!

House music dons Gorgon City have been nothing short of exceptional since their inception in 2012. The pair’s extraordinary ability to balance producing commercial songs that appeal to the masses and also appeasing the underground has been the reason for their success. From releasing music on giants like VIRGIN to underground kings Crosstown rebels, the North London pair have been balancing playing on the main stages of the biggest festivals and also tearing up the dance floors of the best underground clubs. Last summer saw them dominate the huge Terrace at Amnesia for the 1st year of their residency the pair are back and leading the charge as TOGETHER residents.

The queen of dance music, Hannah Wants, simply knows no stopping. Bursting onto the scene a few years ago, Hannah continues her meteoritic rise to the top and is firmly established the dance music elite. A stellar residency at Together at Amnesia and countless sell out tours around the planet has seen her amass an army of fans worldwide and London is no different. Having debuted at SW4 in 2015 and attracting a huge crowd in the process, she will return in 2017 bringing her raw energy and excellent song selection to Clapham Common…

Regarded as one of the most popular dance music artists of the last two decades, MK is truly one of the hottest artists on the planet! There really isn’t a crowd that he can’t get moving as he effortlessly controls any dance floor he’s put in front of. From classics such as ‘Burning’ to modern day bangers like ‘My Head Is a Jungle’, MK is one of the best remixer’s in electronic dance music, there is no doubt about it. Whether it’s a small club or the main stage at a festival, Marc Kinchen always delivers and it will be no different at SW4 2017.

The Executioner is widely considered to be the number one drum & bass artist to have ever lived! His pure wizardry on the decks leaves nothing to imagination as the London-man consistently mesmerizes fans across the globe. His achievements in the scene are second to none with most notably back to back sell out shows the 02 Academy Brixton and the vast Alexandra Palace. His ongoing XOYO residency has been turning heads from all over as fans travelling from far and wide to witness the magic! We are proud to welcome the one and only Andy C back to the main room at Amnesia!

An unprecedented twelve months has seen Camelphat capture the hearts of revelers around the world with charismatic productions and invigorating showcases. As proved by new release ‘The System’ achieving Top 10 status in Beatport’s ‘Deep House’ chart and EP ‘Deets’ commended by industry champions such as Pete Tong. Expect these guys to fire things up on the Common.

The last 18 months have seen Disciples become key players in the dance music scene in very quick fashion. The trio have become regulars on festival main stages worldwide and a stand-out sell out show at London’s illustrious Electric Brixton on NYE 2016 has made heads turn! Their Together residency last summer at saw them effortlessly get the Terrace dance floor moving and they will be back again in the summer of 2017!

Dimension is one of the most exciting and brightest talents coming through drum & bass at the moment. His exceptional talents and raw sound caught the eye of giant d&b label MTA records with Saul & Will snapping up the young gun instantly. His unique ability to fuse sounds from the spectrum of electronic music has made him stand out from the rest of the scene and that’s why we love him so much. His latest banger “UK” has been making waves in the scene and dance music stalwart Skrillex has got his hands on it and produced an epic remix which has made the track got stratospheric. His appearances at Together last summer  demonstrated that he’s only at the beginning of his long and successful journey and we’ll be with him all along the way!

One of the most exciting and prolific artists of the last decade, British-Born, American based DJ Duke Dumont has been responsible for some of the most popular house tracks in recent time. His energy and unique productions such as ‘I Got You’ and ‘Need You’ have made Duke stand out in a fiercely competitive scene and he continues to deliver year after year. Stand out appearances at the world famous Amnesia in Ibiza and a sell out American tour means this man is one of the most in demand DJs on the planet.

Friction’s rise to becoming one of the most-revered Drum and Bass producers and DJs in the world is nothing short of glorious. Being one of the few djs to use three decks to mash up his mixes immediately set him apart from the rest as he is able to create a highly individual sound and has collaborated with some of the world’s most popular artists. Friction has collected enough awards to warrant a trophy room; 2002 won “Best Newcomer” at the Drum and Bass Arena Awards, 2011 inducted into Drum and Bass Arena’s “Hall of Fame, 2013 and 2014 won “Best Radio Show” at Drum and Bass Awards. The atmosphere at Amnesia is sure to be electric when Friction returns and we can’t wait!

A true giant of the scene, Sub Focus has become most one of the most revered and respected artists in electronic music in the last ten years. His productions are second to none and his ability to move any dance floor is insatiable. Having been a regular in the main room at Amnesia for the last few years, he knows the lay of the land and with his recent releases demonstrating why he is one of the best around; there is no better time to see the main man live!

From their humble beginnings performing in back rooms to headlining festivals and playing at the most prestigious venues worldwide, Sigma have truly reached the top of their game. The last couple of years have witnessed the duo produce back-to-back number one singles, pick up a BRIT award and embark on a sellout UK tour. With millions of fans globally waiting for their next hit single, the pair have the world in the palm at their hands. We cannot wait to welcome one of the most dominant and prolific acts in dance music right now to play a full live show at our 14th installment of SW4.