Circa Waves To Headline LeeFest Presents: The Neverland 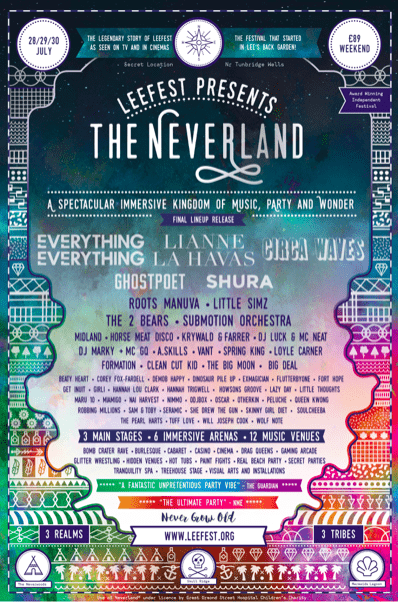 Circa Waves To Headline LeeFest Presents: The Neverland

LeeFest Presents: The Neverland continues to take flight, with the magical land welcoming Circa Waves as Friday Night Headliners to its kingdom of kaleidoscopic dreams.

Emerging as indie-guitar music’s brightest lights, Circa Waves have rapidly become one of the most acclaimed young bands in the country with their infectious sunshine-drenched indie-pop. Liverpool’s favourite sons have enjoyed a huge 12 months which included the release of debut LP “Young Chasers” and a celebratory UK tour.  Circa Waves will be making their UK Festival Headlining Debut at LeeFest Presents: The Neverland, as another exciting chapter in the band and festivals ascendancy unfolds.

Speaking about their landmark performance, Circa Waves frontman Kieran Shudall says:
"So excited to headline our first festival! It's going to be big. It's going to be awesome. The Neverland won't know what's hit it."

They’ll be joined on the bill by art-rock pioneers Everything Everything whose critically acclaimed recent LP “Get To Heaven” drew plaudits from across the musical spectrum for its daring electronic edges and the distinctive vocal range of frontman Jonathan Higgins. With three revered albums in their back pocket, their set at LeeFest Presents: The Neverland will showcase one of the most creative names in modern British rock.

On joining the lineup, VANT said:
“Looking forward to LeeFest Presents: The Neverland, a festival like no other… Created and maintained by one dude and his ever expanding garden. Hopefully we will get to meet the mystery man himself. See you all in the sun (fingers crossed)!

The Neverland is an immersive, kaleidoscopic world of creativity, reckless abandon and the undiminished desire to never grow old. Across 3 Main Stages, 12 Music Venues and 6 Immersive Venues, The Neverland has it all, whether that be the pesky pirates patrolling Skull Ridge with its decadent Bomb Crater Rave, the lunatic lost boys in The Neverwoods Treehouse Stage or mesmerising mermaids glistening through Mermaids Lagoon with its decked real life beach party, there’s a story and an experience around every corner of The Neverland.

From the no-nonsense Drag Queens to the notorious Glitter Wrestling The Neverland is filled to the brim with unimaginable exuberance. Regular Paint Fights, Secret Parties and Cabaret ensure the inhabitants of The Neverland are set for an immersive and unparalleled weekend of culture and partying, whilst in the Gaming Arcades islanders jump back to childhood through the glitchy viral screens..

A mecca of debauchery and darkness, Skull Ridge lies in the shadows of The Neverland with vivid Burlesque displays, Adult Cinema and seedy Casinos where dwellers take one last roll of the dice. Corruption and lawlessness are rife and mob rule is ever present in this unforgiving part of The Neverland.

Sanctuary awaits at the picturesque vistas of Mermaid’s Lagoon where a sunshine-soaked lake is the centre piece and the beautiful people reside. Tropical beats come courtesy of The 2 Bears and DJ Luck & MC Neat and cocktails, swimming and massages await at the Holistic Hot Tubs and Tranquillity Spa.

Experience the unimaginable, dive into The Neverland and pursue the dream to never grow old.