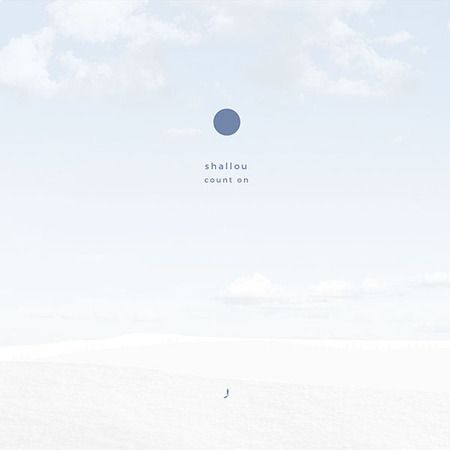 Rising L.A.-based ambient electronic artist shallou proudly releases his new single 'count on' today, as his mammoth 20 date, sold out North American headline tour draws to an end. 'count on' sees shallou (real name Joe Boston) apply his trademark fragile, emotionally-laden narrative over soulful melody and otherworldly, pulsating beats; it's a beautiful moment to mark the end of a huge touring schedule and to see out what can only be described as a life-changing year for the prodigious artist.

The Maryland-born producer has had an exceptional 2018, performing worldwide, including a sold out London date, and garnering over 2.2 million monthly listeners on Spotify, with over 235 millioncollective streams of his releases to date. He has been championed by FADER, Complex, NYLON, Clash, SPIN, SiriusXM and even had his face adorning a billboard in New York City's Times Square.

In tandem with the release, shallou has unveiled the official music video, which was filmed in a beautiful Icelandic setting – watch it here. As with his exquisitely curated Nomad Series before this, the clip is a stunning visual accompaniment to his sounds.

The single release is the follow up to shallou's seven track 'Souls EP', which was released earlier this year boasting a dynamic list of collaborators (Kasbo, RIAH, Cody Lovaas + more). Expect more music to come in 2019.

For additional information on shallou and to access all press assets, please visit shallou.com/press