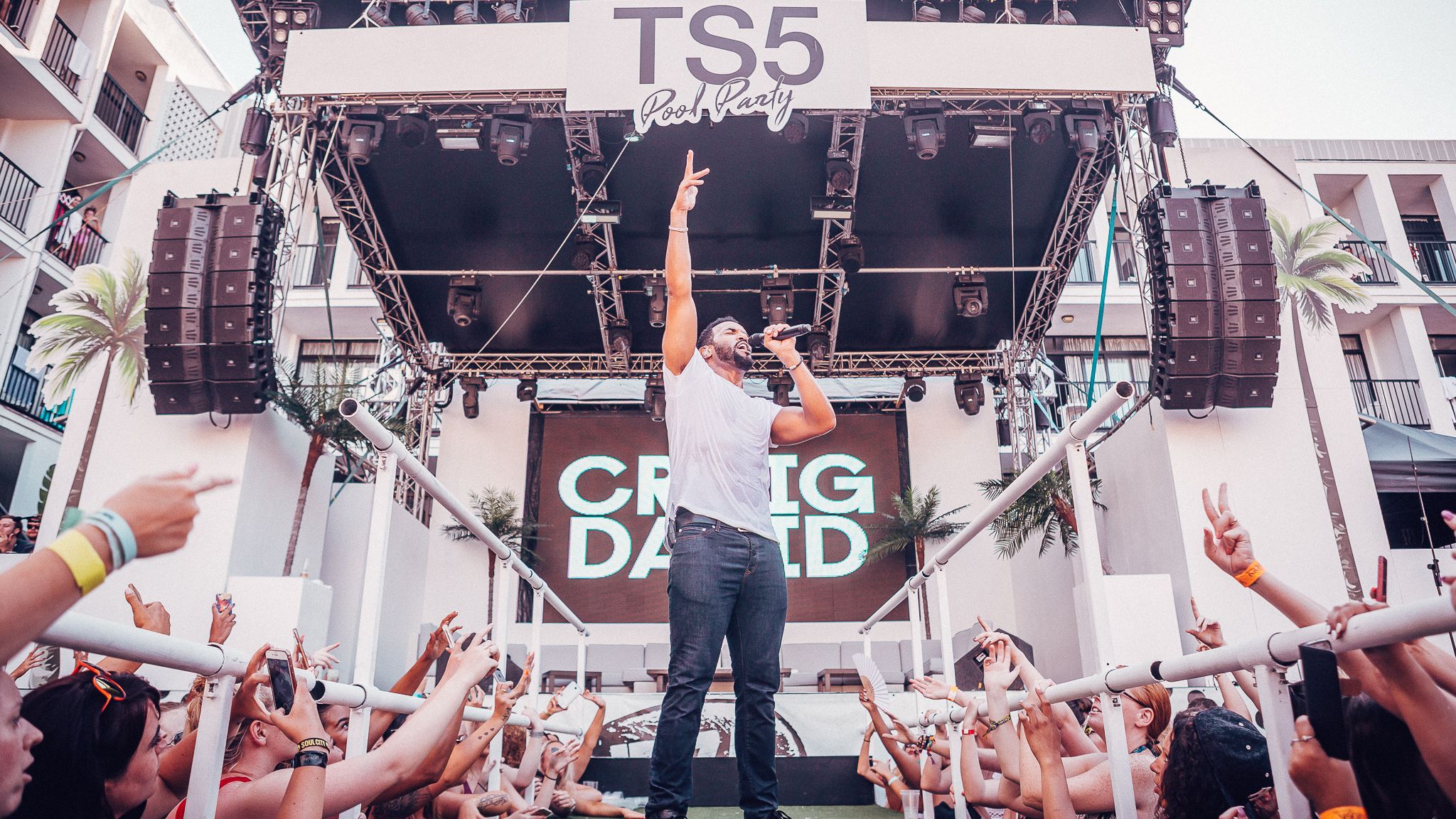 Last summer, Ibiza Rocks scored their biggest hit yet by bringing platinum album-selling pioneer of UK Garage and RnB, Craig David and his critically acclaimed ‘TS5’ show to Ibiza for the very first time.  The sold–out eight week ‘TS5 Pool Party’ residency was widely praised for being one of the best and most successful parties on the island, and the sun hasn’t stopped shining on Craig David since. It’s been the most talked about and relevant return to music by an artist in decades, and he’s coming back to celebrate with a ten-week TS5 Pool Party residency every Thursday at Ibiza Rocks Hotel from 20th July to 21st September.

Last year, sixteen years since his No.1 debut album, ‘Born To Do It’ changed his life, Craig catapulted back into the charts, back into the nation’s hearts and is firmly at the top of his game. With his new album ‘Following My Intuition’ going straight to No.1, selling out shows across the globe, a prestigious MOBO award for Best Male Act, a huge UK arena tour announced for 2017 and a nomination for the 2017 BRIT Awards ‘Best Male’, it would be an understatement to say that this last year has been anything short of monumental for Craig.

Demand for Craig’s live shows is understandably higher than ever but Ibiza Rocks is bringing him back!  Starting out as the most exclusive pre-party in Miami for his friends, hosted in his penthouse Tower Suite 5, ‘TS5’ showcases a master at work. Craig has a unique ability to sing, MC and whip the crowd into a frenzy while DJing simultaneously and banging out huge hits combining his own with massive old school anthems from RnB to Swing, Garage to Bashment and sun-soaked House.  From making history for attracting the largest ever crowd (25K) to Glastonbury’s Sonic Stage last summer, to performing right in the thick of the crowd at his more intimate, open-air TS5 shows at Ibiza Rocks Hotel, Craig always delivers a standout show to remember.

Craig David said: “Last summer I had the best eight weeks of my life bringing TS5 to Ibiza Rocks and I can’t wait to do it all again this year. The energy and reaction was insane and I’m beyond excited to get back out there this summer.”

Jordan Hallpike, Director of Talent & Programming, Ibiza Rocks said: “As a genuine fan, it was an honour to confirm Craig’s residency last year.  The timing was spot on for us both and with our unique venue lay-out and our audience showing an increased appetite for day-time clubbing, a TS5 Pool Party residency made perfect sense.  Not only is Craig David a hugely talented musician, he brings an infectious presence and an energy to the stage that is all-encompassing.  Right in the middle of the crowd, he has every single person raving there with him and that kind of rare intimacy from an international superstar is what makes TS5 at Ibiza Rocks Hotel so special.”

Ibiza Rocks is proud to have played a part in the glorious revival of one of the UK’s finest talents and to be welcoming Craig David back to his Ibiza ‘home’ for Craig David’s TS5 Pool Party at Ibiza Rocks Hotel, Thursdays from 20th July to 21st September.

Tickets and VIP packages will go on exclusive pre sale for 24 hours on 2nd February with general sale starting on 3rd February at 10AM.  Sign up to be the first to know more at www.ibizarocks.com/events

Book direct with Ibiza Rocks for the best prices guaranteed – up to 15% cheaper than other booking agents. Craig David's TS5 opening party, 20th July, for 5 nights from £250 per person. Closing party, 21st September from £135 per person – www.ibizarocks.com