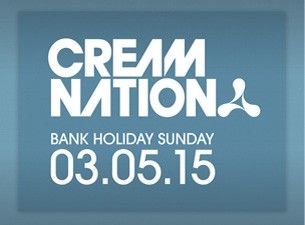 Following Saturday’s sell out show, Cream return to nation on Sunday 3rd May for a bank holiday special, warming us up for festival season with a tantalising line-up featuring some exciting Cream debuts and some of the biggest names performing at this year’s Creamfields.

First up are two of the most talked about acts of the moment, making their long awaited debuts Cream welcomes MK and Duke Dumont.   Both artists will be flying the flag at Creamfields this year and as a warm up are headlining this very special event.  Rarely will you find such high calibre artists together on a club show, as the critically acclaimed Detroit born MK’s talents continue to push the boundaries of musical genres in ways that have earned him a stellar reputation across the dance music spectrum and the Grammy nominated ‘Producers’ producer Duke Dumont’s unique sound synthesising his influences from techno, UK garage and house has catapulted this fresh artist to become one of the most in-demand DJ/Producers on the planet.

One of the most talked about newcomers in electronic music today is SecondCity, as one of last year’s Creamfields highlights he has garnered support from major players including Disclosure, MK and Skream. Another exciting debut at Cream comes from Stephen Fasano aka The Magician, previously a member of the highly revered Balearic disco duo Aeroplane, now stepping out on his own he has garnered a cult following of disco, pop and house fans and is renowned for killer remixes including Lykke Li’s ‘I Follow Rivers’ and Clean Bandit’s ‘Rather Be’. South London trio Disciples return, following their breath taking performance at Cream on Boxing night, they’re back with that unique sound that have made this triple threat one of dance music’s hottest assets.

Bringing some tropical house to the Annexe and continuing with the Cream debuts is Alex Adair, with his debut single ‘Make Me Feel Better’ championed by the likes of Zane Lowe and Annie Mac this British born 21 year old has clocked up a massive 3 million plays on Soundcloud to date with its success leading to remixes for artists such as Ed Sheeran and Jessie Ware.  Signed to Duke Dumont label is Grammy nominated Jax Jones, for those unfamiliar with the name,  you’ll know his music, as this multi-talented instrumentalist, producer and songwriter is responsible for one of the biggest tracks last year ‘I Got U’ which charted at #1 in the UK which he co-produced with the label leader himself.   Completing the bill for Sunday 3rd May includes Kiwi, TCTS, Toyboy & Robin, As I Am, Midnight City and Cream residents Gareth Wyn, Jemmy and Anthony Probyn.  Tickets on sale now