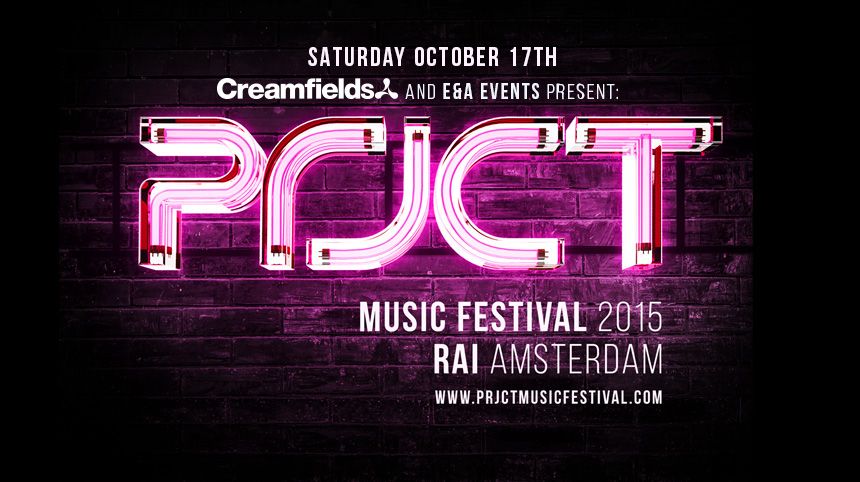 The brand new indoor festival of the Amsterdam Dance Event (ADE) ‘PRJCT Music Festival’, on Saturday 17 October in the Amsterdam RAI, has confirmed its four exclusive hosting partners. For the first time in history, the world’s leading electronic music festival ‘Creamfields’ is coming to the Dutch capital, bringing with it a road blocking line up including Knife Party, DVBBS, Blasterjaxx and Tchami, amongst others. The award winning festival which has already been staged in 17 countries, is represented in the PRJCT BLUE area. PRJCT GREY presents a killer Techno lineup with king ‘Marco Carola’ who plays an exclusive 3.5 hour set + Hector, ReUP and Joey Daniel. In addition famed UK club night ‘Asylum’ is also coming to the RAI and is taking over the PRJCT RED area. The fourth and final area, PRJCT GREEN, is dedicated to the Netherlands’ most famous eclectic concept: ‘TIKTAK’.

Four areas during PRJCT
With the addition of PRJCT Music Festival, the global dance-conference is undergoing a major upgrade this year. The first ever indoor festival during Amsterdam Dance Event at the RAI is adding four stages featuring various leading (international) hosting partners with, of course, only the very best artists from their stable. Each stage has its own musical style and takes a colour as its theme: PRJCT BLUE, PRJCT GREEN, PRJCT GREY and PRJCT RED.

PRJCT BLUE presents: Creamfields
Creamfields is the world’s largest international dance music festival. Born in 1998 to provide the clubbing world with a unique large-scale outdoor event, it has grown into one of the most popular and renowned open-air festivals for electronic music in the world. To date, Creamfields has been staged in 17 countries around the world. This is the first time – during ADE – that the legendary festival is landing in Amsterdam. Line-up: Blasterjaxx, Deniz Koyu, Dirty South, DVBBS, Headhunterz, Knife Party, R3hab, Sem Vox, Tchami and VINAI.

PRJCT GREY
Marco Carola has been in the business for over 20 years. This huge techno-talent, originally from Naples (Italy), went global in the early 1990s. Today, Marco remains a respected artist on the techno scene. He’s recognised worldwide as one of the driving forces behind minimal techno and has many hits to his name, which he has collaborated on with big-name artists. In Ibiza, he’s known as ‘The Beast of The Island’ and ‘Music On’, his weekly residency there, is one of the most popular nights on the party isle. Line-up: Marco Carola (3.5 hour set), Hector, Re-Up and Joey Daniel.

PRJCT RED presents: Asylum
Asylum was borne out of a new partnership between ‘Cream’, world leaders in delivering quality electronic music events on another level and ‘Freeze’, Liverpool’s specialists at shows in unexpected and unusual venues from disused hospitals to cathedrals and bombed out churches with the shows focus on cutting edge line-ups, at the best venues, with a focus on an excellent production. Some very special guests will join forces  for this inaugural event, line up includes: Blondish, Camelphat, Detroit Swindle, Eli and Fur, Infinity Ink, M.A.N.D.Y, Mark Knight, Martin Buttrich, Technasia and 99 Souls.

PRJCT GREEN presents: TIKTAK
Three sold-out festival editions at the Amsterdam ArenA Park, a series of unprecedented evenings at club AIR, a bombastic Mysteryland stage in 2012, an epic New Year’s party at the Heineken Music Hall, and an enormous following of TIKTAK fans comprising of one of the most energetic crowds in the world… The fourth and final area PRJCT GREEN is dedicated to the most successful Dutch eclectic concept: TIKTAK. Lineup: Carnage, Deorro, FeestDJRuud, GirlsLoveDjs, MAKJ, Timmy Trumpet, The Flexican & Sef, The Partysquad and Wiwek.