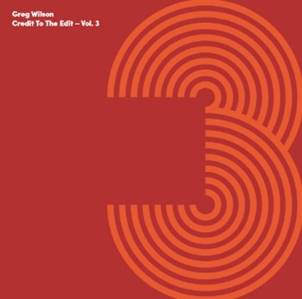 Legendary DJ, remixer and edit exponent Greg Wilson is back at it again with the third instalment of his hugely popular ‘Credit To The Edit’ series. Almost a decade on from Volume 2, ‘Credit To The Edit – Vol. 3’, released 20th April via Tirk Recordings, draws on music from the Disco and Rave eras, adding a seminal Hip Hop cut, a Balearic favourite, as well a few contemporary tracks from the last 10 years.

A groundbreaking DJ, Greg played a key role in introducing black electronic dance music to the UK via his early ‘80s residencies at Wigan Pier, Manchester’s ‘Legend’ and ‘The Haçienda’, as well as over the airwaves on the city’s Piccadilly Radio. Working with Technics turntables, a Revox reel to reel tape machine and a razor blade, Greg carved out his reputation as a UK pioneer and champion of Electro-Funk. Whereas, more recently, following his 2003 comeback after a 2-decade hiatus, he’s gained international renown at the vanguard of a now global re-edits movement.

“This album mainly consists of straight up old-style edits, where I’ve worked with the stereo tracks, extending, re-arranging and sometimes overdubbing. There are also some reworks / remixes where I’ve had the stems at my disposal and been able to bring into play additional instrumentation, courtesy of remix partner Peza on a couple of the tracks – 2016’s ‘Hold On’ by Luxxury Featuring The Reynolds plus the futuristic ‘70s Disco hit, ‘Magic Fly’ by Space.”

Kicking off with Haçienda DJ Mike Pickering’s T-Coy project, the loose-limbed Latinate shuffle ‘Cariño’ is very much a cult classic. Greg’s instrumental edit of Todd Terje’s edit of ‘Glad To Know You’, 37 years on from the Chaz Jankel original, has been a big club and festival favourite, and is made available here for the first time, while Escort make their second ‘Credit To The Edit’ appearance with Greg’s remix of their 2010 release, ‘Cocaine Blues’.

The near-pornographic funk classic ‘Jungle Fever’, recorded by Chakachas, a group of Belgian-based studio musicians, is a playful mixture of Latin music, Jazz, and European-style exotica. and the Fab Five Freddy Hip-Hop landmark ‘Change The Beat’ includes one of the most sampled phrases ever, ‘this stuff is really fresh!’, with Greg’s edit combining the male/female English/French versions to create a unique rap combination.

His 2009 edit of one of the all-time Rave classics, ‘Is There Anybody Out There?’, recorded by Bassheads, is always guaranteed to bring the roof down, whilst he places the emphasis on the Chic-driven backing on Sheila & B. Devotion’s ‘Spacer’, taking out the verses completely and making more DJ friendly. More recent favourites come courtesy of Psychemagik and Red Rack’em, with ‘Getting Away With It’, a hidden classic of the Madchester era recorded in 1989 by New Order’s Bernard Sumner and Johnny Marr of The Smiths as Electronic (complete with Pet Shop Boy Neil Tennant), bringing the curtain down on the third instalment of ‘Credit To The Edit’. A signature edit of Greg’s which slowly creeps up on you, it’s a fitting way to close the album and gets its official release here.

With re-edits culture continuing to grow ever-stronger and becoming a staple of the contemporary dance scene, it brings back into play a whole era of music for a new generation.

“To have played a part in this recent evolution fulfils my personal criteria as a DJ, which is to draw from the past whilst informing the present. I was always cautious of nostalgia traps, where DJs fall into playing the old music in the old way, whereas this was about bringing new context to what was always great music, introducing it to a younger crowd, with the re-edits movement providing the perfect connection from then to now – my role as a ‘bridge-builder’ crystalizing as a consequence.”

The CD features 12 tracks, with 2 further edits from Captain Rapp and Crystal Grass available as part of a 10 track digital package.