Yo Mighty! - Cut Me Clean 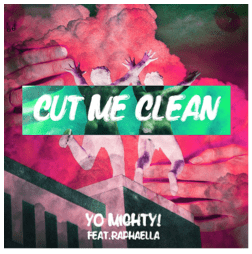 Yo Mighty! - Cut Me Clean

Mysterious Danish DJ / production collective YO MIGHTY! today announced the release of their follow up single, EDM-breakbeat-pop banger, ‘Cut Me Clean’. The cowbell ladened track, hosts huge production, filled with pop hooks, an ever important chorus crescendo, layered with a super strong topline from London based rising vocalist RAPHAELLA. ‘Cut Me Clean’ follows the release of their arpeggio driven break beat debut ‘We Are Mighty’, which gained support from web tastemakers including Indie Shuffle.

RAPHAELLA who has been marked as a one to watch and ‘the go to featured vocalist’, praised in publications including Clash Magazine, Q Magazine, The 405 and About To Blow, stated: “’Cut Me Clean’ is a story of an unbreakable, unshakeable love that runs deep to the core and will never change…”

YO MIGHTY! debut release ‘We Are Mighty!’ premiered on respected music blog Indie Shuffle and trended on Hype Machine within only hours of it’s announcement. Eclectic as they are enigmatic, YO MIGHTY!’s sound  has been likened to artists such as Daft Punk, Kavinsky by respected taste makers such as Indie Shuffle’s Jason Grishkoff and draws from a variety of influences including: Fatboy Slim, The Wiseguys and Basement Jaxx.

Working as secretly as her majesty’s secret service no.1: 007, the mysterious and eclectic producers identities are unknown to even their record label. Tigersprings recently stated: “They just send us the tracks and we release them, we don’t have a clue who the hell they are, they could be my mother for all I know. They make great music so we try not to ask too many questions.”

YO MIGHTY! will release ‘Cut Me Clean’ Ft Raphaella on 9 October 2015