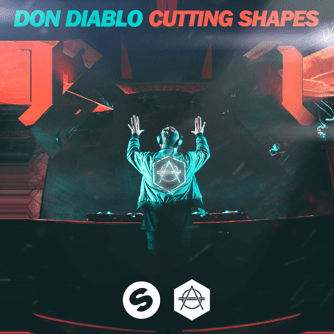 Don Diablo is catching the momentum like no other. Hot on the heels of a groundbreaking festival summer, he now brings the exciting party anthem 'Cutting Shapes', released through his famed HEXAGON label.

Going through perhaps his most creative phase ever, Don Diablo keeps on surprising his audience with new, invigorating tunes. Released on various labels, whether it's on his own HEXAGON label or labels like Spinnin' Records, Axtone or Universal Records, the Don works up a fresh round of excitement with every record.

This includes last year's gems ‘On My Mind’, 'Universe' and the mesmerizing, globally picked up Tiësto collab 'Chemicals', while the HEXAGON imprint (kicked off in 2015 with critical acclaim) delivered several major tunes like the Don Diablo & CID remix of Alex Adair’s ‘Make Me Feel Better’ (which stayed on #1 of Beatport’s main chart for almost two weeks and currently counts over 5,8 million SoundCloud plays).

'Cutting Shapes'
After early 2016 Spinnin' Records hit 'Tonight' and Don Diablo's collab with Steve Aoki and Lush & Simon for the genre crossing festival anthem 'What We Started', he now returns with the undeniable party tune 'Cutting Shapes'. It's the ultimate dance record, featuring cool kicks and sweet vocals, packed together in a crowdpleasing house groove, already buzzing like crazy for a while now, hitting the #1 spot in both the 'Most Heard Tracks' and 'Trending' charts on 1001tracklists, and already (within three days after its release) at #13 on Beatport's Main Chart.

"I was finishing off a new instrumental and while I was working on the right top line for the song, I decided to use a vocal sample from Aaron Smith – Dancin' – as a placeholder in order to test it out during my live sets over the summer. Reactions were really strong when I dropped it the first time and before I knew it things started going viral. I was literally getting so many requests to release the record that I decided to clear the sample and finish it off properly. It's crazy to see how many people have already uploaded videos of themselves dancing to the song, so I immediately had an idea for the video as well. Really excited for this one as I feel it combines vintage feelings with my futuristic production style which has become a trademark sound for me over the last years."