Czarface – Every Villain Needs A Hero 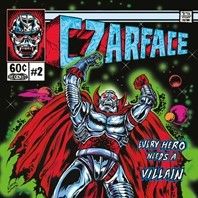 Czarface – Every Villain Needs A Hero

On this, my friends, I believe we can all agree: there are a lot of empty trappings and flashy distractions in much of the mainstream hip-hop music we hear today. What the public consumes on a mass market scale has very little to do with what the genre’s founding fathers had in mind when the culture first connected beats with rhymes, four decades ago.

Fortunately, CZARFACE – Wu-Tang charter member Inspectah Deck and veteran Boston duo 7L & Esoteric – isn’t concerned with the glitz and the B.S. that modern consumer culture is pushing. And neither are the group’s fans.

In 2013, the trio appeared somewhat unassumingly with their self-titled debut, which was chiefly produced by DJ 7L and included guests ranging from Ghostface Killah and Cappadonna to Vinnie Paz, Action Bronson and Roc Marciano. The soon-to-be acclaimed group found out quickly that there was a groundswell of hip-hop fanatics thirsting for the lunch pail, lyrics-above-all-else rap they fell in love with in the ‘90s. Several pressings of the album on CD, 2-LP and cassette later, they are back and ready to up the ante.

This time around the group is the same, but it’s fair to say that all three men have stepped up their games. “We knew how we felt about the last album, but weren’t sure how it would be received by listeners,” explains MC Esoteric. “But people really responded to it, even more than we had hoped. That gave us the confidence to really spread our wings and let loose on this one. The chemistry is even tighter this time around. We know exactly what lanes we are cruising in and what weight class we are fighting in for Round 2.”

Inspectah Deck states, “The whole Czarface collaboration is dope ‘cause it’s just straight-up, classic hip-hop. It gives you a Wu-Tang feel, but it doesn’t pull Esoteric out of his element. When I’m in Wu-Tang, I have to come a certain way, because we have a certain style of fan. But when I’m doing Czarface, it allows me to actually be an MC, it allows me to just spit. I love that.”

Any fighting analogies presented – whether drawn from pugilism or ‘80s wrestling, both which figure into Every Hero Needs A Villain – are apt ones, considering the unrelenting lyrical attacks that Deck and Esoteric unleash on track after track, each trying to one-up the previous verse. Best of all, it is friendly camaraderie, based around a loose theme of renegade mutant MC talents running wild. DJ 7L explains, “All three of us is influenced by comics, sci-fi movies, TV, wrestling. Czarface encompasses all of that, and that common ground helps with the visuals as well.”

Eso says, “What we’re about is coming to wreck shop, constructing abrasive but engaging verses within the darker corners of pop culture. It’s clobbering time, like The Thing or The Incredible Hulk. With a classic track like [K-Rob’s  and Rammellzee’s epic 1983 song] ‘Beat Bop,’ the MCs were exercising confidence and talking shit. We’ve upped the vocab and wordplay since then, but it’s gunning for the same vibe.”

He adds, “You turn on a Czarface track and it puts you right in the pages of our comic, our world, our streets. It feels powerful.”

On the production side, 7L shows yet again – as he did with the group’s debut – that he remains a formidable yet underappreciated musical force, constantly providing hard, funky and alternatingly ominous backdrops for the assembled MCs to use for lyrical luge paths. From the infectious, stomping “World Premier” to the dastardly, dark, keyboard-driven “When Gods Go Mad,” he is on-point for every one of the album’s 15 bangers.

And beyond the grooves 7L provides, he also consistently keeps listener ears on edge with multiple change-ups, never falling into “let the loop run” territory. Esoteric explains, “It’s never easy, but George always keeps up with the relentless lyrical pacing that Deck sets. And Deck brings confidence to me and 7L when we are going through beats, because we know which ones he’ll sound amazing on. It’s like having Dominique Wilkins on your squad. I can stand outside and shoot my jumpers while Deck is in the paint with authority. In the end, 7L can cater to any style we need.”

Lyrically, it’s a given that all assembled MCs make Every Hero Needs A Villain a lyricist’s delight, but let’s dive deeper. As the elder statesman of the trio, Deck is usually first up to bat on any given track, slinging relentless rhymes that ricochet from topic to topic, but are always clever to the extreme. “From the womb to the tomb / The boom-bap ritual / Not the typical / Bullshit that you listen to,” he delivers in rapid-fire on “Good Villains Go Last.” And on “Junkyard Dogs” he sums up his approach simply with, “My motto is bread over beef / You can call it samosa.”

As was established last time around, Esoteric consistently feeds off Deck’s bravado and energy, with destructive lyrics like, “Shatter foes with my weapons / It’s medicine from the heavens / I’m menacing with my presence / The nerve of these f*cking peasants / I murder ‘em with a sentence / I’m merciless with a pen / My words are Ric Flair / Interspersed with MC Ren” (on “World Premier”). He also exhibits an epic series of lyrical runs on the sprawling, 8-minute “Escape From Czarkham Asylum,” where he proceeds to spin an epic, graphic-novel-worthy tale straight out of J.R.R. Tolkien’s subconscious.

Last but not least, we should mention the impressive guest list on the trio’s sophomore triumph. When asked, the group finds difficulty in deciding on a favorite guest, but eventually land on one who perhaps best reflects the no-B.S. approach that all three Czarfacers exhibit: producer and MC Large Professor, who brings an excellent run to “World Premier.” Eso states, “Historically, Large Pro has always been on my list of the Top 10 MCs ever, and he just delivers a classic Extra P verse on there. He rhymes ‘lyrics’ with ‘earaches’… only Large Pro can pull that off.”

Another favorite is “Nightcrawler,” which features Deck’s Wu-Tang brother Method Man. “As a song, I just think everyone kills it,” says DJ 7L. “That beat always had a great energy to it, and I think the rhymes work perfectly. Having Meth on there was a real dream come true.” GZA, MF Doom and the Beatnuts’ Junkyard JuJu bring muscular flows to three very different cuts: some weighty discourse about worldly issues on “When Gods Go Mad”; abstract brag workouts with “Ka-Bang!”; and the distorted, dirty, punchline-fest of “Junkyard Dogs,” respectively. ‘90s indie peer RA The Rugged Man and young spitter Mayhem Lauren round things out nicely, with “Good Villains Go Last” and “Deadly Class.”

Guests aside, at its core Czarface is a trio and they have now fully cemented their chemistry on record and their friendship off the stage, reveling in the surprise hit they created two short years ago. Now they return as an established entity, creating another boom-bap classic for fans that yearn for more than what rap music seems to embody in 2015. If you want punchlines, there are more here than a heavyweight bout with a five match undercard. And if you want intelligence, it is a constant.

Beyond the music, it’s all iced with a ridiculously intricate and beefy 70-plus page, hardcover CD casebook, with lyric sheets and extensive artwork by Gilberto Aguirre Mata (El Ultimo Codice) and L’amour Supreme, with “Death & Abduction,” a comic written by MC Esoteric (aka Seamus Ryan); and an explosive, comic-book-inspired cover by L’amour Supreme. The release will also be available as a Double LP on clear vinyl which will include the full comic book, and a limited edition cassette.

So sit back, let your mind open up and enjoy it all, cut by cut. Czarface is back with, as they say, “Deadly Class.”

Exclusive bundles via Get On Down include: