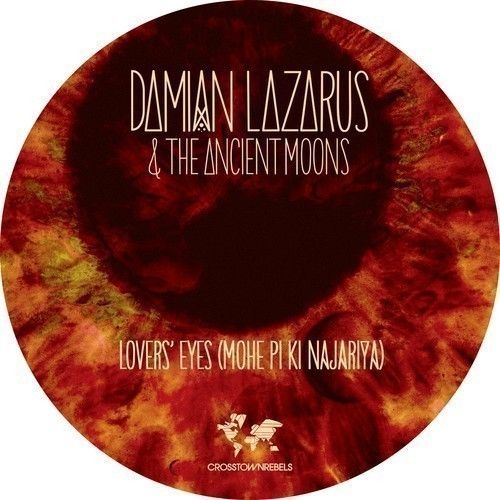 Damian Lazarus and the Ancient Moons entered our orbit earlier in the summer with the stomping and mystically brilliant ‘Lovers´ Eyes (Mohe Pi Ki Najariya)’. Now the highly anticipated remix package is upon us – featuring a souped up re-edit from man of the year Dixon that and a driving remix from Swiss/Spanish underground star Mendo.

“I had a feeling Dixon would be into Lovers Eyes but I didn’t expect him to request to remix the track. Talk about kudos! The edit he has delivered pushes all the right buttons for the dancefloor and the drop is one of the biggest you will see all year. To compliment this we took a more rollin’ approach with the excellent Mendo remix, who cuts up the spirit of the track into a peak time killer.” – Damian Lazarus

The single ´Lovers´ Eyes (Mohe Pi Ki Najariya)´ was the first release from Lazarus´s new collaborative artist project, which will build towards an album and live shows in early 2015. Joined at the production controls by James Ford (Simian Mobile Disco, Arctic Monkeys, Florence), for this track Lazarus completed album recording sessions in Mexico in February. Ancient Moons brings together a wide assortment of vocalists, collaborators and players, from around the world, with more details of this heady mix to be released in the near future.

Already one of the year´s more unique and distinctive electronic music releases named both Pete Tong’s Essential New Tune and Mixmag’s Big Tune of the month, Lovers’ Eyes was inspired by Lazarus´s more leftfield Lazpod tendencies, the Get Lost events and Day Zero festival in Mexico. It’s music for deserts, jungles and sunrises. Featuring the vocalists Fareed Ayaz, Abu Muhammad and Hamza Akram – Pakistan´s leading Qawwali singers, here they sing of cosmic love, and the four eyes of the lovers becoming one, set against Lazarus and Ford´s incendiary techno production. Qawwali takes the form of a series of thematically and formally linked verses, and is steeped in a tradition that can be traced back to the 13th Century. Lazarus first encountered Fareed Ayaz and co. performing in the film ´Reluctant Fundamentalist´, starring Riz Ahmed. Riz, who also records for Crosstown Rebels, made the necessary introductions, and the unique collaboration was born.