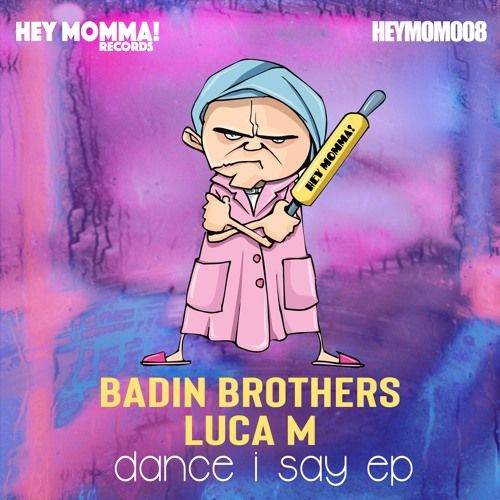 Acclaimed London-based Producer and DJ duo Badin Brothers step up for the eighth release on Luca M’s Hey Momma! label, featuring an exciting collaboration with the label boss on ‘Dance I Say’, which is accompanied by ‘The Stranger’, released on 30 November.

Following Luca M’s scintillating remixes of the Badin Brothers’ previous two releases – ‘Caravan’ and ‘Music Off’ – ‘Dance I Say’ sees them join together to unleash a deep and twisted dance-floor filler that’s brimming with acid house synths and a cut up vocal that showcases the Badin Brothers and Luca M’s renowned production styles.

‘The Stranger’ then takes things darker and more mysterious. ‘The Stranger’ sees Badin Brothers combine bass-heavy percussion with searing synth stabs that cut in and out, deployed alongside layered hats to produce an after-hours rolling cut with tribal influences, thanks to unusual elements such as fast didgeridoo samples.

Badin Brothers are the Paris born, London based production duo of Scott and Olivier Badin. The duo are renowned for their ability to produce rich and soulful music that blends styles with strong percussion elements and Latin American influences. This is also displayed in their exciting, energetic DJ sets which saw them make their Ibiza debut in 2014. Since then, Badin Brothers have played across the world. Their 2017 ‘Music Off’ EP and 2018 ‘Caravan’ EP (ft Octopus Kid) were both released on HOUSEKEEPING Records and received strong support from a variety of top selectors including Dennis Ferrer, Claptone, Richie Hawtin, Gorgon City, Richy Ahmed, Claude VonStroke, Steve Lawler, Nic Fanciulli, HOUSEKEEPING, and Paco Osuna.

Luca M’s music is synonymous with all that is exciting about techno and house music. Having emerged as the figurehead of the hugely prolific Romanian techno scene, Luca M’s focused and considered approach to his craft has worked to confirm his position as a globally recognised DJ and producer. Widely regarded as one­to­watch since making his production debut in 2009, Luca M’s rise to prominence has been relentless and has seen his music supported by such leading DJs as Marco Carola, Richie Hawtin, Joseph Capriati, Solomun, Hot Since 82, Joris Voorn, and Paco Osuna.