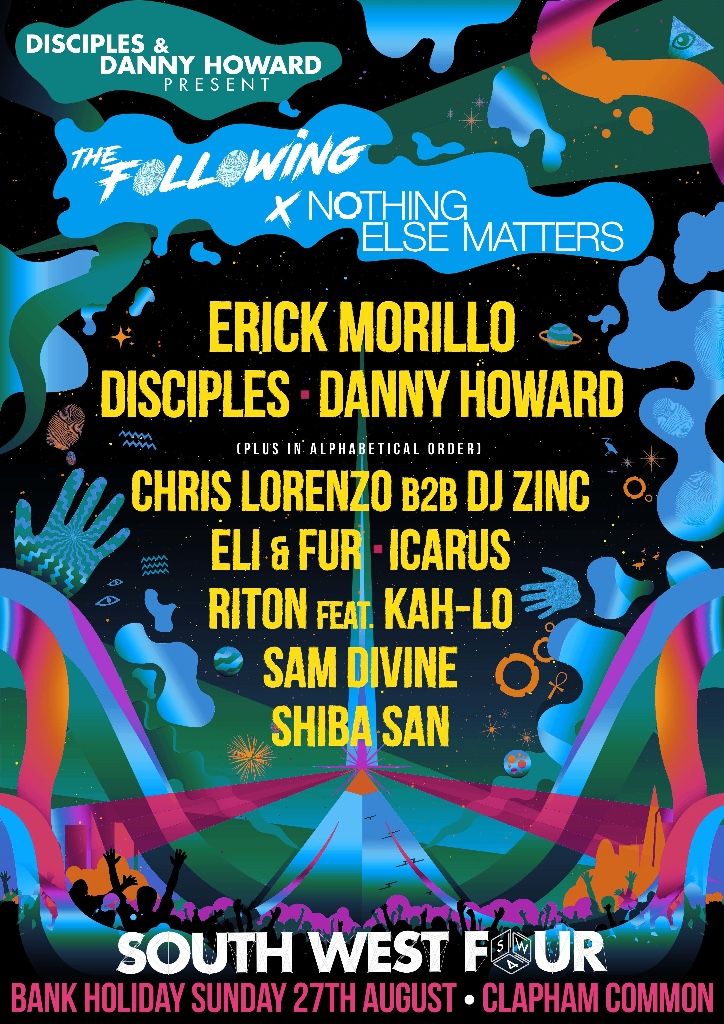 BBC Radio 1 DJ Danny Howard and prolific trio Disciples will be hosting their first ever festival arena stage at this year’s SW4 Festival at Clapham Common, London. To be held on Sunday 27th August, their brands – The Following and Nothing Else Matters – will join forces for a not-to-be-missed party.

An all-day affair, Danny Howard and Disciples have curated a line up that boasts a wide variety of high calibre talent from all over the world including close friends and championing upcoming artists. Entitled ‘The Following meets Nothing Else Matters’ stage, it will be the first time that the brands have collaborated.

With both artists’ garnering huge crossover appeal and becoming two of the biggest UK dance music exports, they will be joined by a mixture of underground and mainstream talent. Heading the event will be American house legend Erick Morillo with a career spanning over two decades and Defected’s Sam Divine. Playing alongside them will be Shiba San, Chris Lorenzo B2B Zinc, Eli & Fur, Icarus, Riton ft. Kah-Lo and Shiba San.

Speaking about the event, Disciples said, ‘after a successful run of our The Following events over the past 6 months, we are happy to bring our event to SW4 with the legendary Danny Howard – can’t wait for this one! #TentBusiness’, whilst Danny says it’s a dream come true, ’it’s something I've always dreamt of doing and now I'm so excited to curate and host a festival arena for the first time ever! The fact that it's with my boys Disciples, the hottest name in UK dance music right now, means we're gonna create something special. Bring on the summer!'

Another busy summer period awaits Danny Howard as he will be hosting at several festivals including BBC Radio 1’s Big Weekend, V Festival and for the first time at Hideout Festival – further expanding his horizons into the underground world. Adding to his already hectic schedule, Danny will be returning to Ibiza this season for several dates at Amnesia and Pacha.

London production trio Disciples will also be heading to the White Isle for their Amnesia residency. Following on from last year’s successful trajectory, their recent single ‘On My Mind’ secured #1 in the Shazam Charts & Top 40 of the UK Official Charts. The release also reached #5 in the Main singles chart & amassed over 4.3 Million streams on Spotify.

The Following meets Nothing Else Matters stage
Disciples · Danny Howard