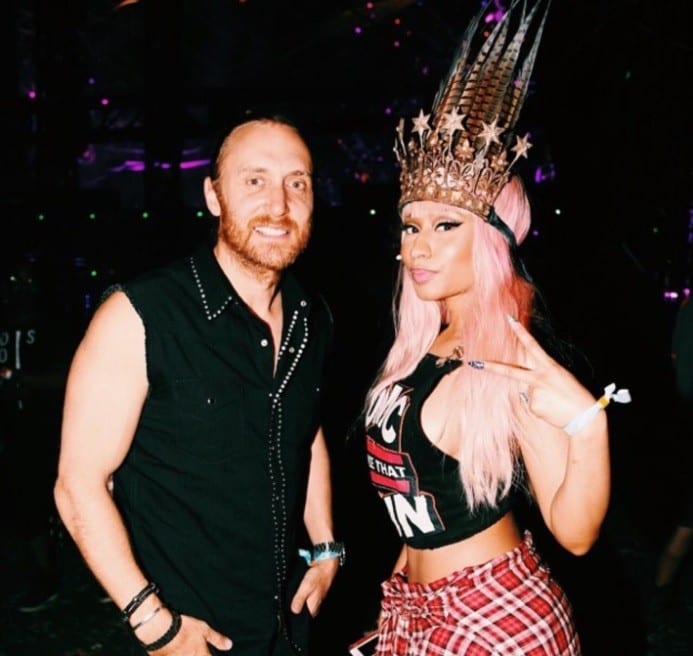 Multi-platinum selling and GRAMMY award-winning DJ/producer David Guetta closed out the Sahara Tent at Coachella’s Weekend Two last night in style, with a performance of epic proportion, with a ram-packed crowd going crazy to his electronic beats. Then by surprise he was joined onstage by Nicki Minaj during his Afrojack mix of his new single, “Hey Mama” ft. Nicki Minaj & Afrojack. It was a cool fly by from Nicki as “Hey Mama” continues to dominate the charts in the US, with the single currently sitting at #21 on Top 40 radio, #6 on Shazam’s USA Top 100, #7 on iTunes’ Overall singles chart, #1 on the Dance/Electronic Chart for three weeks running, with streams up over 45% to 948,000 last week.

Guetta garnered backstage Coachella support from many friends and collaborators including Beyonce, Nicki Minaj, Usher as well as The Black Eyed Peas who surprised his audience last  week with a live performance debut of their new single “Awesome,” which Guetta produced and is featured on. David Guetta is credited as helping break dance music into US radio six years ago with his Black Eyed Peas collaboration “’I Gotta Feeling,” so the two artists have a long standing relationship. When Fergie jumped up for the encore, they showed why.

David Guetta headlined Coachella in support of sixth studio album, LISTEN, which features vocal contributions from Sia, Nicki Minaj, John Legend, Emeli Sandé, Ryan Tedder, Sam Martin and Nico & Vinz. The album sees Guetta expanding his musical boundaries, challenging the dance music community with A-list collaborators, as well as genre-spanning emerging talent, all while staying true to his masterful pop and club roots. LISTEN also finds David Guetta coming with a fresh approach to his songs on this album, which has lush instrumentals, and features strings and acoustic instruments in the mix.

Guetta has sold over 8 Million albums globally, combined with over 44 million tracks sold globally. With LISTEN, David Guetta will cement his status as a genre-busting hitmaker with his in-your-face fusion of electro and hip-hop. David Guetta has been headlining some of the biggest festivals in the world over the past year, including TomorrowWorld, TomorrowLand, and Electric Zoo, and continues on at that pace in 2015 with Coachella, Ultra Music Festival, TomorrowLand Brazil, Wireless, and more.