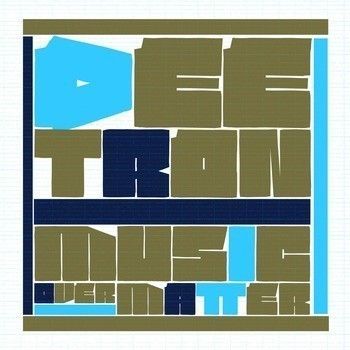 Asked to describe his music to a new listener one might falter. While it’s true that there is a very specific sound at the core of his music, it is the fluid nature of Deetron’s work that defines him as an artist. Yet there is one word that can be used to sum up this dynamic musical mind and the polymorphic sounds that he has mastered – Maverick.

Departing from the accepted course, a free-spirited, non-conformist both musically and in his chosen path within the industry; this distinguishing characteristic is also the life-blood of Deetron’s studio work. His broad musical palette the bedrock from which a myriad of pleasureful sounds have entertained and held firm fans across the globe.

His second album, which will be released on Music Man Records, finds Deetron in a unique, transitional phase. The vocal element of his music coming to the fore, with Music Over Matter he proves that there is no substitute for substance and skill, putting music firmly back in the frame is the message, and how poignant to today’s tumultuous industry!

A prismatic mosaic of vocal textures and expertly crafted grooves, Music Over Matter takes flight through the bounds of Deetron’s musical persona, working vocals in unexpected ways through the deepest, most colorful and penetrating moments. A new facet to the multi-dimensional Deetron sound. From cranked up four to the floor and voluminous deep house grooves, to dream-sequence synths, elegant drum-programming and powerful melodic signatures, there is not a single moment of this album that won’t thrill those craving a hefty interjection. Yet as motley and satisfyingly eclectic as they come, each track of the album is connected through a deep vein of soulful musicality.

Joining Deetron for the trip are old friends such as Ripperton and Cooly G, who lay the foundations for the album with their opening track ‘Thinking’ – glitchy scratchy Techno, which blends in perfectly to Deetron’s collaboration with the inimitable, cosmic surfer Seth Troxler with whom he throws down a golden gauntlet of pitch-bent synths and heightening fervor with their hypnotic ‘Love Song’. Deetron’s hit single with Hercules & Love Affair also features…

Flipping genres so elegantly, Deetron teams up with Belgian vocalist Delvis for an old-school Motor City influenced vocal number, which is followed by the beautifully smooth vocal talents of Ben Westbeech who produce a perfect melody-drenched house track, which will also be Deetron’s forthcoming single. Deetron’s collaboration with Fritz Kalkbrenner adds a seriously unique twist to the album, with rich vocals resonating over Deetron’s orchestral soundtrack.

Teaming up with Justin Chapman again for ‘Strange Things’ with Simbad along for the ride results in a gorgeous slab of deep electronica… George Maple provides the perfect vocals for ‘Rescue’ with her (yes, it’s a woman!) ethereal vocals washing over you in pure delight.

Music Over Matter also features pure instrumental tracks by Deetron, including ‘Sing’, ‘Come Away Further’, ‘Count on Me’, ‘Can’t Love You More’ and for your listening pleasure has added the 2011 hit ‘Starblazer’ as a bonus track.

From a producer, whose unrelenting passion is the mark of his music, Music Over Matter is a reflection of the vibrant landscape upon which he so fearlessly treads… A bold, panoramic stroke that will appeal to so many more than just the intrepid nomads of the underground.