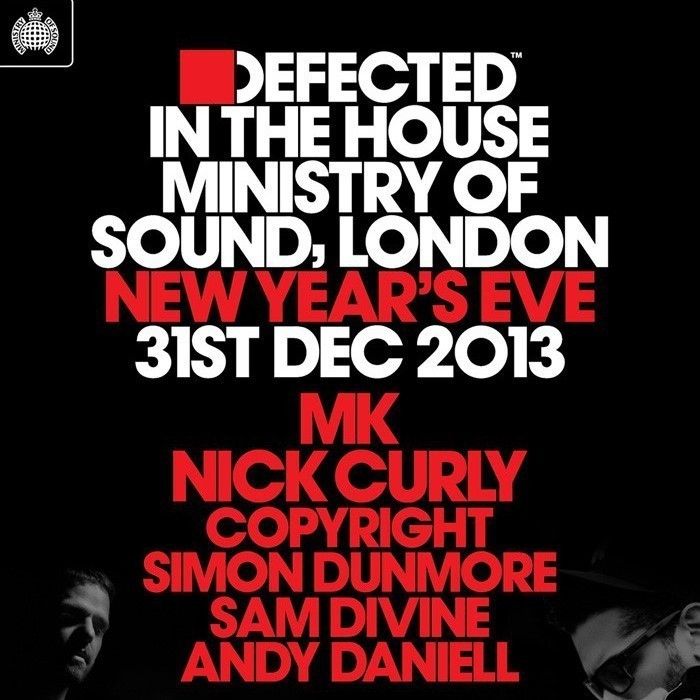 Tickets are now on sale for what promises to be THE standout New Year’s Eve event in the capital.

From sold-out shows at Ministry of Sound throughout the year, to landmark appearances at We Are FSTVL and the acclaimed summer residency at Booom! Ibiza, Defected In The House has stood tall in 2013 and welcomes some of its finest collaborators to help celebrate.

MK is the phenomenon who conquered the underground music and pop world – twice – and whose recent return to prominence only furthers the legend of one of dance music’s most in demand producer/DJs. He revolutionised music in the early 1990s and twenty years later still champions a sound that is as unique and relevant as ever, with his Storm Queen ‘Look Right Through’ (Dub III) remix not only a true underground anthem but also set to achieve high-end chart success. Taking the Midnight Set at Ministry of Sound, MK will round off an incredible year that has witnessed his “flawless” (DJ Mag) debut mix album ‘MK In The House’ as well as a series of sensational performances which included explosive sets at Booom! and The Coronet earlier this summer: http://youtu.be/TCpO0PerqnE.

Joining MK in the Box at Ministry of Sound will be Nick Curly; fresh from dropping his mind-blowing remix of Dennis Ferrer’s ‘Mind Ur Step’, his rolling, tech-edged late night sound will close the show. Defected’s founder, Simon Dunmore, will set the tone with one of his famous early sets and long-term Defected In The House favourite Sam Divine who, by way of Ibiza, has also established herself as one of London’s unequivocal stars, reprises her show stealing set from We Are FSTVL earlier this year.

In 103, Simon Dunmore returns alongside Copyright for a very special, party-minded back-to-back set and Defected A&R, Andy Daniell, completes a line-up that reflects the true musical spirit of Defected.

For fans of pure, honest house music, there is no other place to be this New Year’s Eve. See you on the dancefloor…