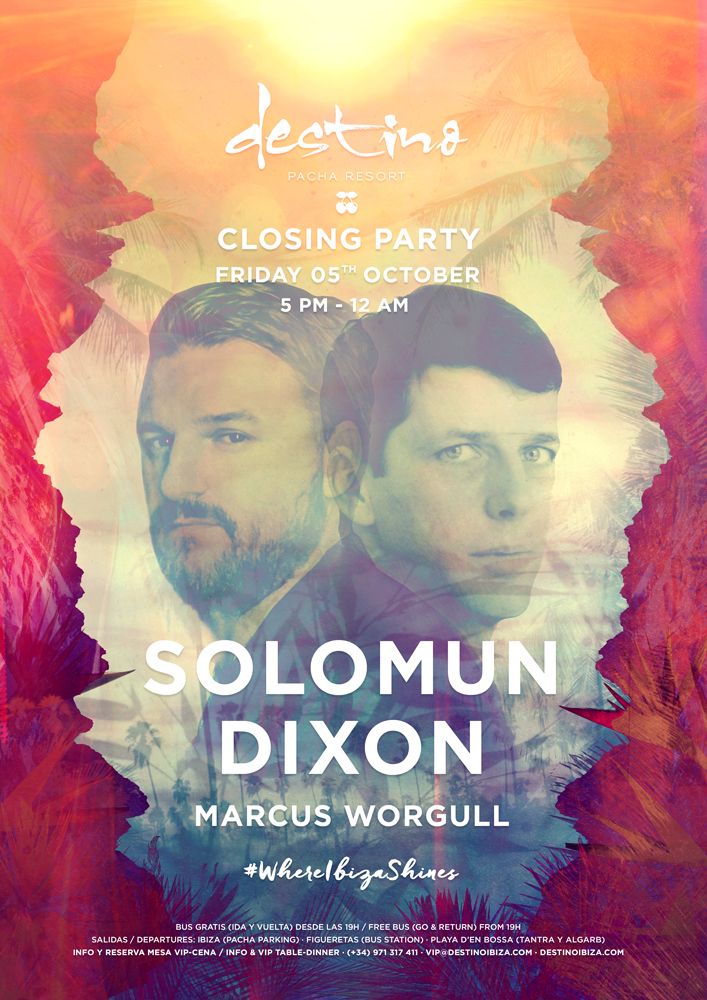 As the summer season draws to a close, Destino will open its doors for the final time this year for the highly anticipated closing party. Headlined by a trio of the most-sought after names from underground music, Destino welcomes label-heads, Solomun and Dixon, alongside Marcus Worgull, to mark the close of yet another phenomenal summer for the unique venue.

With each artist needing little introduction, their accolades are in abundance. Whether it be pioneering new sounds via Solomum’s Diynamic label or Dixon’s Innversions imprint, both artists are firmly at the forefront of underground music. With hectic global touring schedules seeing them grace the industry’s most renowned DJ booths, Solomun and Dixon have always been staple artists in Ibiza, year after year performing to party goers from the around the world.

Few underground acts are able to make the crossover to the mainstream however, Solomun and Dixon recently achieved a milestone, with both artists featuring in the latest instalment of the Grand Theft Auto Gaming Franchise. Not only being included as in-game characters, fans were also treated to new music and fully animated DJ sets, yet another incredible achievement, marking both artists unquestionable influence on modern electronic music.

Alongside Solomun and Dixon, Marcus Worgull is also set to perform at Destino. Holding years of influence over the electronic music scene, he is widely considered to be one of Germany’s finest artists. Having released music on a number of influential labels, the start of 2018 saw him announce the ‘Broad Horizons’ EP, the first release of the year on Dixon’s Innversions imprint. Received to great acclaim, this further cemented Worgull’s position as an esteemed artist by his peers and the wider industry alike. A fully fledged international artist, Worgull is certain to bring his unique and diverse musical taste to Destino’s closing event.

An unrivalled outdoor venue on the White Isle, Destino hosts a vast outdoor poolside space, making it the first port of call for daytime pool parties sound tracked by the best selectors on the circuit. Destino has seen the likes of Sven Väth, DJ Koze, Cassy, Dubfire and D’Julz gracing their poolside booth already this season. With the season drawing to a close for Destino, there’s no question that 2018 has been yet another remarkable year, showcasing the finest names in House and Techno across the summer.