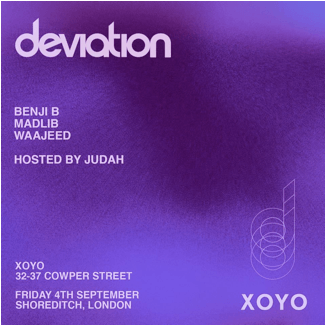 Deviation makes a triumphant return home to XOYO after a brief hiatus following their exceptional 13-week residency with us earlier in the year.

Having welcomed the likes of Four Tet, Hudson Mohawke, Gilles Peterson and Skepta to perform alongside him over the course of his 3-month run, Benji B truly demonstrated his versatility and eclectic tastes that have come to define his monthly Fridays with us at XOYO. Over the past three years, the relationship between the club and Deviation has grown in strength and notoriety – everyone knows what they’re getting when they come to a Deviation session.

With so many memories already in the bank, hold tight for the resumption of normal service with their monthly Fridays…

For the first Deviation session since the residency, Benji has invited none other than legendary hip-hop producer Madlib to the proceedings. Having started his production life as part of rap group The Alkaholics and then Lootpack, he was promptly snapped up by Peanut Butter Wolf for iconic hip-hop label Stones Throw. Since then, he went on to release numerous classic records such as Champion Sound with J Dilla and the timeless Madvillainy with MF DOOM. With him comes Detroit-born producer Waajeed for an all American affair, it should make for an extremely special occasion all round.