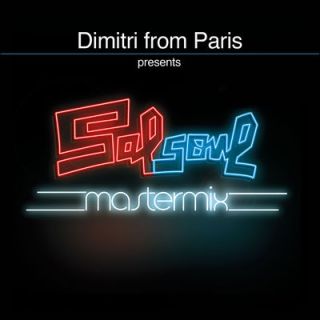 When it comes to disco, Dimitri from Paris is a genuine authority and the ultimate connoisseur; a gentleman DJ who carefully cultivates an image yet eschews spectacle in favour of fastidiously executed musical selections, drawing on four decades of glorious music. Instrumental in both the recent success of disco-leaning nights like Glitterbox and his XOYO London shows, Dimitri has lived and breathed disco for his entire career.

Anyone who has experienced a Dimtri From Paris set, or listened to one of his celebrated remixes – of Chic, Prince, Bjork, the list goes on – will understand the deep respect and love he has for disco: and none more than for that king of disco imprints: Salsoul.

Operating out of NYC, Salsoul was one of the foremost disco labels of its time, championing a burgeoning sound that came to define not only many of the nightclubs and late night hangouts of the city, but one that shaped many people’s lives. Over the years, if anything its influence has only grown, and is now recognised as one of the most important labels across any genre of music.

Dimitri From Paris present Salsoul Mastermix sees the world’s foremost purveyor of quality disco get to grips with a catalogue of undeniable depth and quality, presenting both a DJ mix and a collection of exclusive re-edits.

Originally released back in 2015 as a Japan-only CD product, import copies were changing hands on Discogs for close to £100 and with a double LP of exclusive re-edits released for Record Store Day 2017 selling out immediately, Salsoul commissioned a full global release of the compilation across CD, vinyl and digital.

“From the mid 70's, Salsoul seized on the emerging uptempo soul music from Philadelphia, and channelled it through a series of innovations to become disco. Those innovations have since been ubiquitous to many forms of music: the 12’’ single vinyl, the multiple remix/dub versions, and the DJ at the centre of it all.

“Whether it featured full-blown orchestras or rawer stripped down beats, Salsoul’s catalogue was crafted with an energy and desire to raise above ones’ condition, alongside the charmingly naive impetus to somewhat change the world. And despite its undeniably strong music qualities, it’s probably the latter hat allowed it to cut through three decades, remaining timeless to this day, and genuinely changing the world for the better.” Dimitri From Paris

CD1 see Dimitri select not only a number of seminal disco classics, but also a who’s who of remix pioneers. From Frankie Knuckles, Shep Pettibone and Larry Levan to Walter Gibbons, Francois K and Tom Moulton: the tracklist includes reinterpretations that set the remix blueprint for generations, and are still heavily influential to this day.

On CD2, Dimitri presents 10 of his own re-edits, selecting songs and artists that are of significant personal importance and demonstrating that he is almost without equal in this field. Loleatta Holloway ‘Love Sensation’, Double Exposure ‘Ten Percent’ and Inner Life ‘Moment Of My Life’ all get the Dimitri treatment: bonafide classics given a new lease of dancefloor life by the King of the Disco.

Coinciding with the release of Salsoul Mastermix, London's most vivacious party, One Night at the Disco, throw their biggest bash yet at Electric Brixton on Friday 15 September, with Dimitri From Paris soundtracking the affair alongside soul selector Lovebirds.

Tickets for One Night At The Disco with Dimitri From Paris and Lovebirds are available from Resident Advisor:
https://www.residentadvisor.net/event.aspx?982621

Sadly, the label was unable to ride the infamous disco backlash and closed in 1984, before being revived in 1992 when Holloway’s ‘Love Sensation’ was sampled and became an integral part of Black Box’s ‘Ride On Time and Mark Mark & The Funky Bunch’s ‘Good Vibrations’. This marked the start of renewed interest in Salsoul, with its catalogue becoming a sample treasure trove for a new generation of producers.