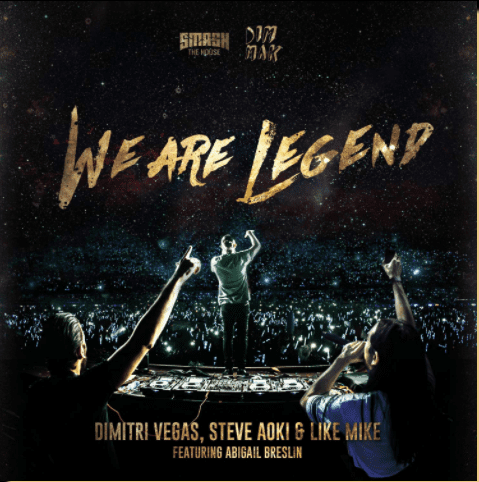 When Dimitri Vegas, Like Mike and Steve Aoki first combined forces for the most epic supergroup ‘3 Are Legend’ in dance music, fans knew that expectations for main stage live spectacles and in-studio tracks that slay would be more than surpassed. From smashing ULTRA Miami to Tomorrowland, Creamfields to Ushuaia Ibiza, their presence explodes and entrances in equal measure and now, as a Christmas thank you, the unstoppable trio are giving you, their wildest and dearest fans, a free download of their monster collaboration ‘We Are Legend’.

Some fans might evenrecognise the featured vocalist, Abigail Breslin. The Oscar-nominated star of Little Miss Sunshine, who has also appeared in Hollywood moviesZombieland, Signs, Enders Game and was also cast in August: Osage County, the film adaptation of the Pulitzer Prize-winning play of the same name, alongside Julia Roberts, Benedict Cumberbatch, and Meryl Streep. Abigail’s collaboration on the track isn’t her first foray into the world of music, releasing her own album ‘The World Now’ back in 2013, but this is her first time being the featured vocalist on a dance record – and it’s fair to say she has completely made this record her own!

Head to www.weareleg3nd.com to unlock the stadium-ready track – Merry Christmas!

Dimitri Vegas & Like Mike’s path from celebrated DJs to dominating the global electronic music scene has been on a constant, upward trajectory. Whether they’re wreaking havoc on their global exploits, or ripping up the music charts with immense tracks and remix cuts from the A-list elite, or playing their part in the incredible rise of the Belgian mega-festivalTomorrowland, the award-winning brotherly duo of Dimitri Vegas & Like Mike have become one of the hottest tickets in dance music. The Dimitri Vegas & Like Mikephenomenon is a story that continues to unfold. Netting the #1 spot in their native Belgium going platinum with ‘The Hum’, their magic touch was repeated as their Ne-Yocollaboration ‘Higher Place’ spent 10 weeks atop of the Belgian singles chart. Securing the #1 Billboard Dance Chart spot furthermore, this placing reoccurred with the release of their Diplo collaboration ‘Hey Baby’. Disney Records invited the brothers to rework the iconic theme song for the fifth installment of their blockbuster movie series‘Pirates of the Caribbean’. Working with Hans Zimmer on the film’s lead score ‘He’s a Pirate’, the brothers added a big room flavor to the latest edition, ‘Dead Men Tell No Tales’. Summer 2017 also saw Dimitri, Mike, David Guetta and Kiiara team up for summer anthem ‘Complicated’, which date has amassed over 65 million streams on Spotify and 45 million YouTube views. ‘Complicated’ is currently #1 on the Billboard Dance Chart – earning the brothers their 3rd consecutive Billboard Dance Chart #1 chart position!

About Steve Aoki //
Steve Aoki is a 2x Grammy-nominated international producer/DJ, electronic dance music entrepreneur, and founder of the trendsetting record label, events/lifestyle company and apparel line Dim Mak. Since launching in 1996, Dim Mak Records has become a launch pad for seminal acts such as The Chainsmokers, Bloc Party, The Bloody Beetroots and The Gossip through deftly marketed single and full-length releases and now has well over 500 releases to date. As a solo artist, Aoki has become a force of nature averaging over 250 tour dates per year. Known for collaborations ranging from Snoop Dogg to Linkin Park to JJ Abrams to Migos and Louis Tomlinson (One Direction), Aoki’s debut artist album was nominated for the Best Electronic/Dance album Grammy while his follow upsNEON FUTURE I & II featured his Gold certified single & ‘Delirious (Boneless)’ with Kid Ink.  Most recently “Just Hold On” with One Direction’s Louis Tomlinson became a global smash after the pair debuted the song with a performance on X Factor. The song debuted at #1 in 43 countries and has since achieved Gold or Platinum status in 18 countries. Aoki recently received his second Grammy nomination in the Best Music Film category as the subject of the 2016 Netflix Original documentary “I’ll Sleep When I’m Dead” which premiered to a sold out audience at the Tribeca Film Festival. Steve has also both donated and raised hundreds of thousands of dollars for various charitable organizations including his own AOKI FOUNDATION with a primary goal of supporting organizations in the brain science and research areas with a specific focus on regenerative medicine and brain preservation. Steve Aoki released his latest album Kolony on July 21(via Dim Mak Records / Ultra Records) debuted at #1 on the Electronic Album charts. Kolony marks Aoki’s first full turn into rap music, with nearly 10 years of hip-hop collaborations, which he describes as “bridging the gap” between genres and is stacked with hard-hitting rhymes from some of the most prominent lyricists today, including Lil Uzi Vert, Lil Yachty, Migos, 2 Chainz, Gucci Mane, ILOVEMAKONNEN, T Pain, and more.