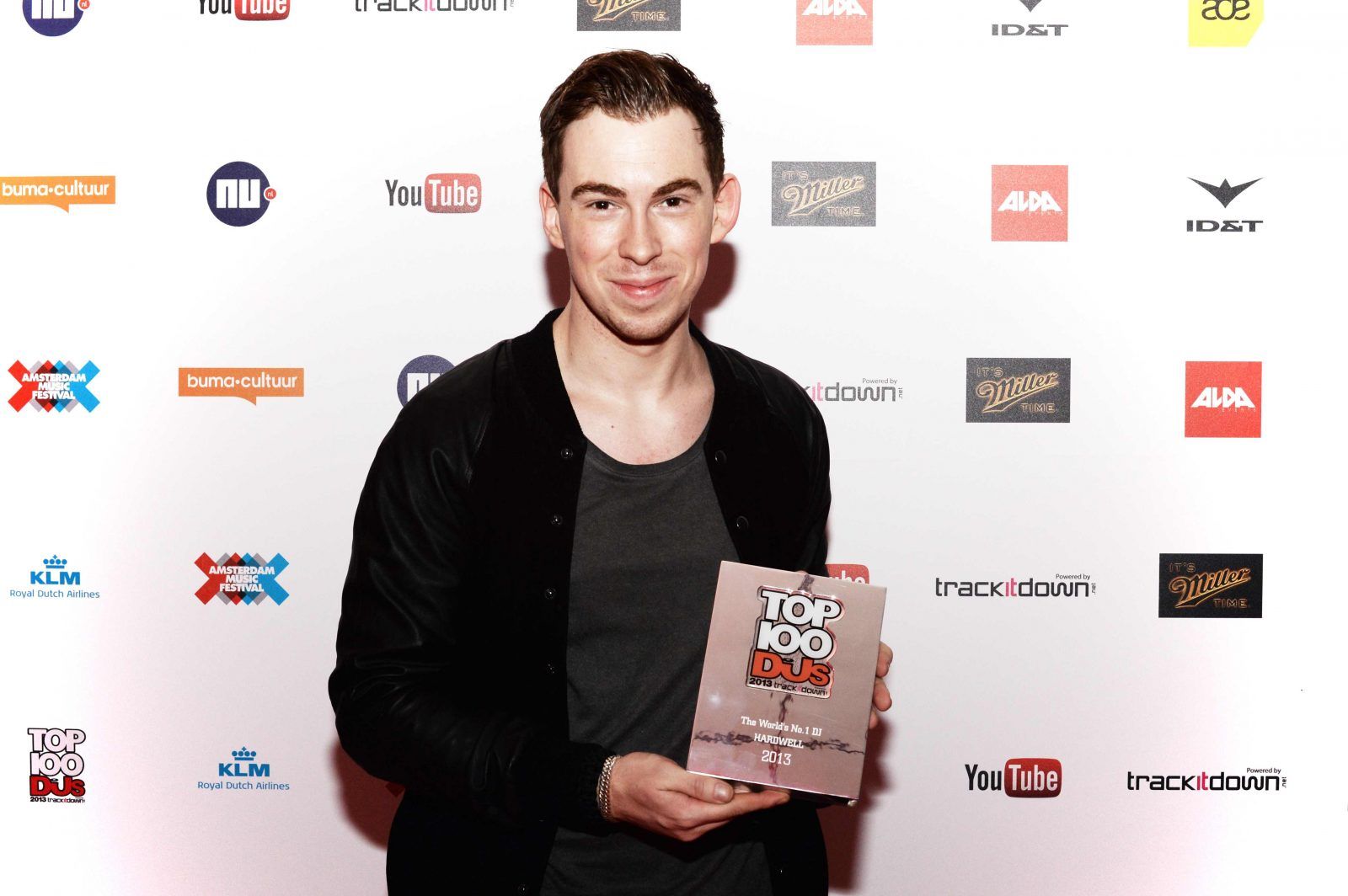 The DJ Mag Top 100 DJs Poll has a new winner, Hardwell. The Dutch DJ/producer has replaced five-times winner Armin Van Buuren and been crowned the world’s No.1 DJ for the first time, making him the youngest ever winner at only 25 years of age. Hardwell received the award at the DJ Mag Top 100 DJs Poll Awards party presented by legendary producer, Giorgio Moroder, held for the third consecutive year during the Amsterdam Dance Event (ADE). The show took place at Amsterdam’s RAI venue as part of the Amsterdam Music Festival, an initiative of ALDA events and ID&T.

In the Poll’s 20th year, the Dutch superstar, Tiësto, has been awarded the inaugural Top 100 DJs Legend Award brought to you by KLM, carrier of the world’s best DJs. KLM recognises that Dutch music pioneers including Armin van Buuren, Tiësto, Hardwell, Nicky Romero, Sunnery James and Ryan Marciano, plus promoters like ID&T and labels like Armada, have flown around the world multiple times, setting international standards within the electronic music scene. As a big supporter of the pioneering Dutch spirit and a carrier of ‘Dutch pride’, presenting a historical award like this was a natural fit to KLM, particularly as the awards are in the company’s hometown and that 2013 is the 25th anniversary of the Dutch dance music industry. Watch the highlights of the award ceremony at the Amsterdam Music Festival on klm.com/music

The award for highest new entry, was given to Dyro, making it a hat-rick for Holland and further evidence of EDM’s newfound dominance of the Poll.

After receiving the award in front of a capacity crowd at Amsterdam’s RAI venue, Hardwell played an electrifying DJ set before flying to London for the UK edition of the DJ Mag Top 100 DJs Poll party at Electric Brixton, held in association with Ministry of Sound. There he joined a line-up featuring Dimitri Vegas & Like Mike, Quentin Mosimann and Bob Sinclar.

Released on 21 October, Ministry of Sound and DJ Mag have joined forces for the second consecutive year with a 3 CD album release including a selection of the Top 100 of 2013 across CD 1 & 2 and a special edition bonus CD of the best voted DJ’s from the past 20 years. The 3 CD package includes all of 2013’s Top 10 and all past Top 100 winners.

The Top 100 DJs Poll powered by Trackitdown is a publicly voted open poll. It inspires fierce debate all year round with speculation on the world’s top DJ, new entries and biggest climbers, dominating online discussion and beyond. 2013’s edition saw votes from approximately 750,000 people, making it the biggest music poll in the world.

Miller Genuine Draft have teamed up with DJ Mag for a twelve month content partnership to deliver the most engaging EDM information to fans across the globe. You can follow this content at www.djmag.com/miller <http://www.djmag.com/miller> .

ABOUT ALDA EVENTS:
ALDA Events is a global producer, concept developer and promoter of DJ and event concepts. ALDA Events works from a ‘whole concept perspective’ using her broad experience and knowledge in the field of stage design, technical production, video, special effects, decor design and entertainment for every production and collaborates with world famous DJs such as Armin van Buuren, Hardwell, Sander van Doorn and Sunnery James & Ryan Marciano.

The Top 100 DJs poll is a popularity contest – by definition, the DJ who gets the most valid votes finishes highest in the poll, and this year that honour has gone to a young Dutch DJ — Hardwell. Hardwell has knocked five-times winner Armin Van Buuren off the top spot – so it’s congratulations to Hardwell, the youngest ever winner of the coveted Top 100 DJs poll.

Hardwell’s victory can be seen as a triumph for EDM — although Hardwell himself prefers to term his DJ style ‘house’. EDM is the US term for ‘electronic dance music’ that has come to mean the all-conquering blend of electro-house, trance and dubstep. Enduring leader of the #trancefamily, Armin, who himself has been name-checking EDM, has slipped to No.2 and just behind him Avicii (No.3), Tiesto (No.4) and David Guetta (No.5) are all paid-up members of the EDM family – although Guetta, too, still calls himself ‘house’. With Dimitri Vegas & Like Mike shooting up a whopping 32 places to No.6, Nicky Romero up 10 places to No.7 and Steve Aoki up seven to No.8, the top ten is rammed with big EDM players.

Indeed, with Alesso up to No.13, Calvin Harris up sixteen places to No.15 and twin sisters Nervo (one of only two female acts in the poll) up 30 places to No.16, most of the top twenty consists of EDM jocks.

Skrillex’s mutant bass music variant sees him just outside the top ten (while Zedd and Knife Party both jump into the mid-twenties), and you’re hard-pushed to find many trance DJs in the top twenty. W&W make a healthy leap, although they decline to use the T-word when describing themselves, and only Dash Berlin, Aly & Fila and of course Armin out of the top twenty self-identify as trance.

So has trance become a dirty word? Assorted significant DJs have been quietly dropping the T-word from their descriptions over the past three years, following on from Tiesto who did this in his bid to embrace other styles and conquer America. With Markus Schulz down eight places to No.21, Paul van Dyk down 16 to No.32, ATB down 12 to No.33, Sander Van Doorn down 21 places to No.39, Ferry Corsten down 20 to No.42, Cosmic Gate down 41 and Gareth Emery down a massive 37 places to No.51, most of the trance big hitters have taken a tumble this year. Fresh-faced Orjan Nilsen is down 17 places too, and young Arty from Russia falls 29 positions to No.57. Only Andrew Rayel, up 49 to No.28, and re-entries for Myon & Shane 54, Tiddey, Matt Darey, Solar Stone and John O’Callaghan ensure that the second tier of trance stalwarts remains strong. Does this mean that more trance DJs and clubbers will become absorbed into the EDM motherlode? Only time will tell.

Other big EDM new entries include Krewella from America, Martin Garrix from Holland, Dannic from Holland, and highest new entry Dyro — also from Holland. The latter three are protégés of new No.1 Hardwell (himself a protege of Tiesto), featuring on his label Revealed and with the same management company, and continue a theme of the Top 100 DJs poll whereby proteges are dragged into the poll on the coattails of their more well-known mentor/label boss.

If it has been a tremendous year for EDM and not so great for trance, it hasn’t been too bad for hardstyle. Headhunterz may have slipped down to No.23 and Noisecontrollers tumbled 39 places to No.66, with Wildstylez, Wasted Penguinz and Brennan Heart all falling too, but hardstyle-lite act Showtek are up to No.27 and gabber mentalist Angerfist is up eight places to No.34. Frontliner is up 42 places to No.37, Da Tweakaz are up to No.86, and there are new entries for Vicetone and Gunz For Hire.

With big room house being sucked into EDM, it’s arguable as to who the highest house DJ is now. With the award going to Hardwell, and aside from Guetta you could say that the next three house DJs are the individual Swedish House Mafia jocks – Ingrosso, Axwell and Angello, in that order. As a trio, the Swedes are down to No.26, and another anomaly is that Daft Punk have jumped 22 places to No.22 – even though they haven’t DJ’d for years. They have though, of course, released the biggest electronic album of the year — ‘Random Access Memories’. Fellow French house DJ/producers Bob Sinclar and Martin Solveig both remain in the 100, although they’ve both been flirting with their fair share of EDM in recent times.

There used to be tons of techno DJs in the Top 100 list, but this has now been reduced to just two —Richie Hawtin and Carl Cox. Both have kept virtually identical positions to last year – in fact, Richie is up two places — possibly off the back of their Space Ibiza residencies, and the fact that they continue to innovate and entertain.

Diplo has finally made it into the Top 100, but largely the new entries to the chart are young guns. Incredibly, Martin Garrix from Holland was only born in 1996, while Vicetone is only 20. Other Top 100 mainstays such as Porter Robinson (21) and Madeon (19) are showing that you don’t have to have served your dues for a decade in order to make it in the DJ world these days, and the new No.1 Hardwell himself is only 25 — when Paul Oakenfold and pals were kick-starting the UK scene in 1988, Hardwell was born.