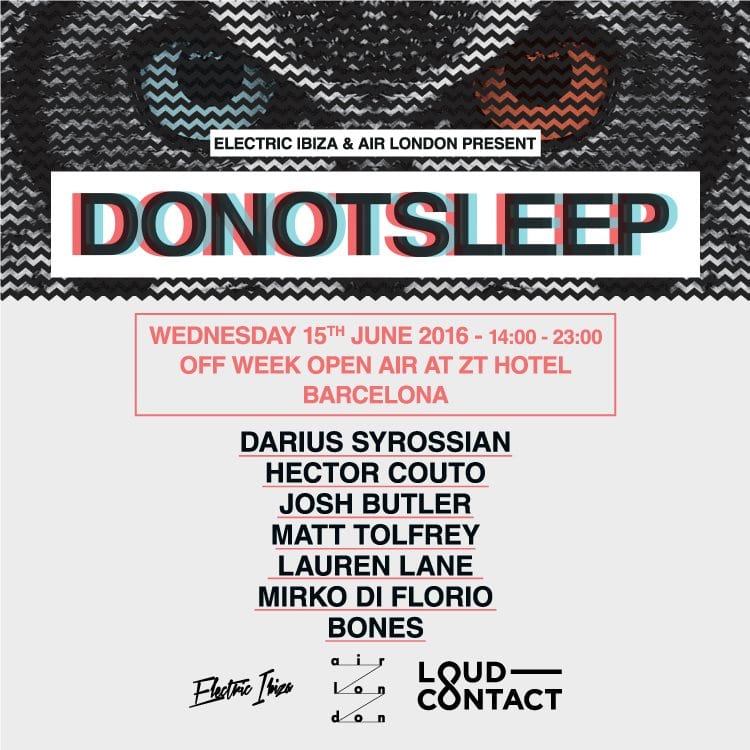 The Ibizan club institution will descend on ZT Hotel Villa Olimpica on 15th June for Off-Week 2016.

With Do Not Sleep’s unique take on how clubbing should be experienced dominating venues from Berlin to Ibiza, few obstacles stand left to conquer for one of the most enthralling clubbing concepts in recent times. Showing absolutely no signs of taking their feet off the pedal, Do Not Sleep’s recent accolades include embarking on a European summer tour along with being to set host the world’s most iconic terrace for 16-weeks, Space Ibiza.

In true Do Not Sleep fashion, a host of the industry’s most enthralling artists will take over Barcelona’s ZT Hotel Olimpica. Welcoming Darius Syrossian, Hector Couto, Josh Butler, Matt Tolfrey, Lauren Lane, Mirko Di Florio and Bones, this remarkable lineup is set to deliver the true ethos of Do Not Sleep bringing underground music back to it’s roots.

With each artist providing a different shade of house and techno, their combined accomplishments are nothing short of stunning with likes of Leftroom boss Matt Tolfrey supplying his trademark fusion of underground sounds, or Hector Couto and Josh Butler’s eclectic catalogue of productions set to mesmerize the venue in Barcelona.

It is without question that Do Not Sleep’s vision is evident within each event that it hosts and their debut during Off-Sonar is eagerly anticipated and tipped to draw in clubbers from across Europe. With Off-Sonar widely regarded as the focal point of the international dance music community, it was only a matter of time before Do Not Sleep made their debut reinforcing their status as one of the most pivotal brands in underground music.