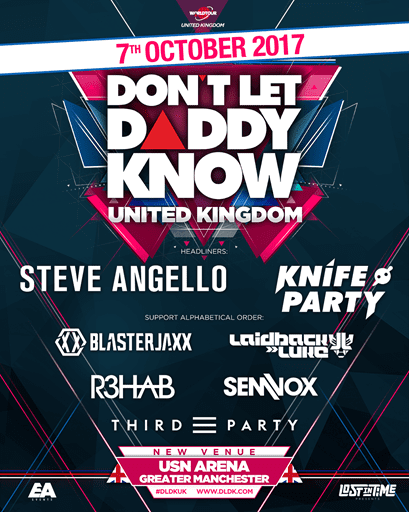 What began five years ago on the magical island of Ibiza, is now a worldwide phenomenon. DLDK has gone on to entertain hundreds of thousands of clubbers around the globe in over 15 countries, and shows no sign of stopping recently celebrating its five year anniversary at the 17,000 cap. Ziggo Dome in Amsterdam! The Dutch brand first hit the UK in 2015, opting for Manchester’s iconic Victoria Warehouse as the ideal venue for its English debut. After selling out the venue for two consecutive years, the Victoria Warehouse, Lost In Time and of course DLDK, knew they needed to expand. The new location at the USN Bolton Arena in Bolton, Greater Manchester will allow thousands more avid clubbers the chance to experience this international clubbing behemoth.

Headlining the show on Saturday 7th October is the Grammy-nominated, Steve Angello. Founder of the dance supergroup, Swedish House Mafia, and head honcho of Size Records, Angello’s focus is now on a solo career that continues to take him to the world’s hottest nightspots and festival stages. His set at Don’t Let Daddy Know will be one of his most memorable solo gigs yet.

Joining the bill is the genre-pushing duo, Knife Party – an outfit so forward-thinking that when they first unveiled their unique breed of ‘seizure music’ on Radio 1 from Space Ibiza in 2011, the demand was instant and remains constant today. From electro house to dubstep and everything in between, aural senses will be in overdrive when they perform at the Bolton Arena.

Don’t Let Daddy Know is famed for its big room, EDM line-ups made up of top draw acts from its base, The Netherlands. Huge riffs, enormous builds and killer drops come courtesy of home grown talent, Blasterjaxx, a style heard on their hit releases on Tiësto’s Musical Freedom (Loud & Proud), Spinnin’ Records (Titan) and on their latest EP, XX Files Festival Edition.

Fellow Dutchman, Ladiback Luke, also stars, demonstrating the skills that have cemented him as a regular fixture on the biggest dance stages around the world, from Tomorrowland Brasil to Ultra Music Festival, Creamfields UK to Sensation India. DLDK audiences are in for a real treat when this praised DJ and producer takes to the stage.

Further Dutch globetrotting talent comes in the form of R3HAB. With over 100 million Soundcloud streams  and six #1 Beatport singles, R3HAB has a vast catalogue of killer dancefloor cuts that are sure to be unleashed at this event.

Essex Duo Third Party will represent the UK showing their Dutch counterparts and the Don’t Let Daddy Know crowds exactly why they are the go to DJ’s to kickstart any party.

Any DLDK lineup would not be complete without a set from its founder, Sem Vox. Not just one of the world’s leading club promoters, but an established producer with fans including Martin Garrix and Diplo, and a technically gifted DJ that can rock any dancefloor. Witness this and more when Sem returns with DLDK to the UK.

Sign up now for exclusive access to pre-sale tickets to ensure the cheapest possible price viam.me/WeAreLostInTime. Standard tickets go on sale on 26th June and will be available from www.dldk.com.

Lost In Time and DLDK will set the benchmark for next-level event production when this exclusive show arrives in the UK. Don’t miss out on the chance to experience it first hand and, it goes without saying, but, don’t let daddy know! Ssshhh…