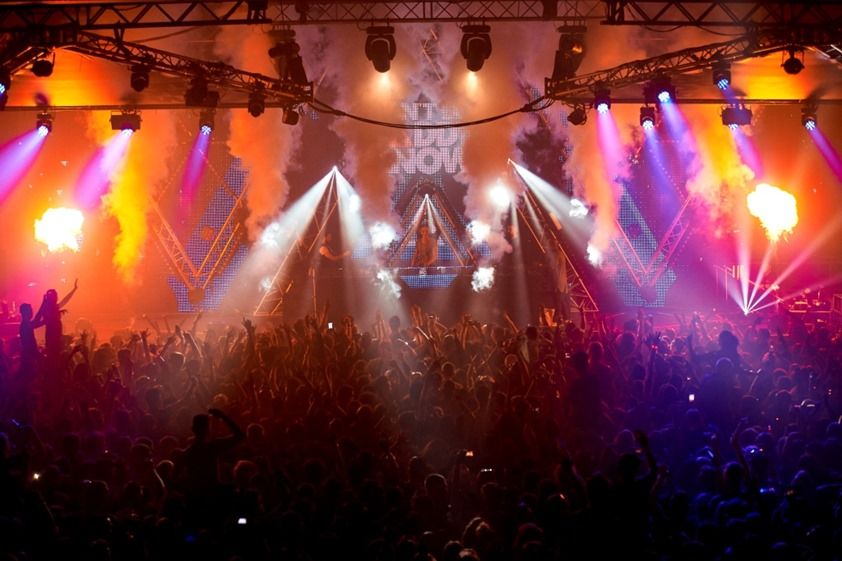 Global party brand, Don’t Let Daddy Know, touches down in Manchester on Sunday 1 May 2016 at the iconic Victoria Warehouse, Manchester. In a repeat of the hugely successful event last April, 5,000 clubbers can expect out of this world entertainment, cutting-edge production and mind-blowing special effects, all set to make this bank holiday unforgettable. This infamous global party brand brings a huge DJ lineup to UK shores, including; Showtek, Blasterjaxx, Don Diablo, Laidback Luke, Ummet Ozcan, Florian Picasso, Sem Vox, and Third Party. This is a rare opportunity to enjoy the Don’t Let Daddy Know experience. Last year’s event was a sellout so move fast. Pre-sale tickets are available now, with general tickets on sale from 10am on Wednesday 10th February.

Don’t Let Daddy Know has taken the world by storm, since crashing on to the scene at the world’s largest club, Privilege Ibiza, just over 3 years ago. The Dutch brand has taken its massive events as far afield as Chile, India and Istanbul. Some of the biggest DJs on the planet have taken charge of the Don’t Let Daddy Know clubbing rollercoaster, including Martin Garrix, Dimitri Vegas & Like Mike, Tommy Trash, Steve Aoki, Major Lazer and many more.

Bank holidays are traditionally big dates for clubbing and this lineup would struggle to get any bigger! The owner of Victoria Warehouse, James Cohen, comments: “After a hugely successful sold-out debut UK show last year, we're very excited to have Don’t Let Daddy Know back. The concept, production and attention to detail last time was mind-blowing. Since then they’ve just got bigger and bigger and the plans for this show are going to blow people away.”

Showtek need little introduction. 2015 saw more huge releases on Spinnin’ Records and rocking DJ sets across the globe, building on their global hit, Booyah, as well as co-productions with Tiësto, David Guetta and Hardwell. This duo will deliver a proper headline set in Manchester!

Joining them is Hexagon label founder and one of Amsterdam’s most in-demand remixers, Don Diablo, with credits including Madonna, Rudimental and Ed Sheeran to name a few. Also lining up at Victoria Warehouse are Blasterjaxx. The Dutch duo are as popular as ever, hitting #19 in the DJ Mag Top 100, launching Maxximize Records and releasing on Spinnin’, while still DJing everywhere from New York to Switzerland.

The legend that is Laidback Luke will be showing why he’s still one of the most in demand DJs in the world, dropping the big room tunes from his Mixmash label and showing off the DJ skills that always deliver on the dancefloor.

Ummet Ozcan also steps up to showcase the techno-influenced trance which has won him legions of fans and massive gigs such as Tomorrowland 2015. Expect smiles and a big, energetic sound.

Florian Picasso is the great grandson of Pablo Picasso and is rapidly making a name for himself in the art of DJing, playing alongside the likes of Steve Aoki. Check him out at DLDK to see why he’s being tipped for big things in 2016.

Sem Vox continues on his mission to lead the next generation of Dutch talent, dropping a killer set to hungry crowds. And last but by no means least, Third Party will represent the UK, as the Essex duo show their Dutch peers and the Don’t Let Daddy Know crowds exactly what they can do behind the decks.

To get the deepest ticket discount possible, sign up for pre-sale early bird tickets now from £25 at http://bit.ly/dldkuk2016. The next ticket tier comes in at £27.50 available from www.skiddle.com at 10am Wednesday 10 February. From this date, VIP tickets are also on sale for £45 with extras including fast track entry, private bar, VIP toilets plus access to the VIP mezzanine level for the best views in the house.

The last Don’t Let Daddy Know event at Victoria Warehouse shook the venue to its very foundations. This party promises to be even bigger and even better. Just remember #DontLetDaddyKnow.