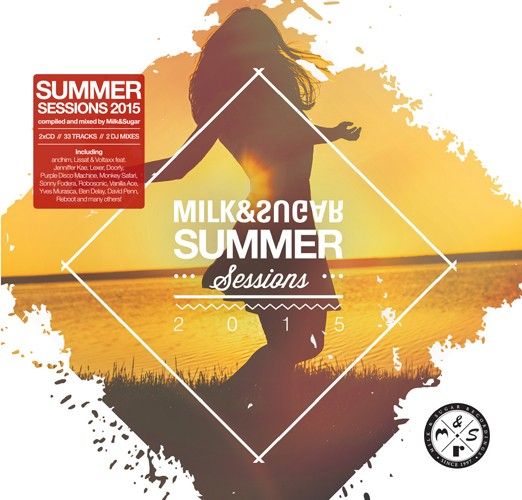 Renowned DJ and production duo Dry & Bolinger have been behind some remarkable releases in the past months, and their creative streak is showing no signs of halting. Their latest project is a dual entry on Milk & Sugar’s ‘Summer Sessions 2015’ compilation, with two masterpieces: ‘Got Back’ and a collaboration with Stu Patrics by the name of ‘Raise Up’.

Both tracks have hit Beatport and Traxsource’s shelves on the 12th of June, 2015 as part of the Milk & Sugar Recordings’ package and are set to be released on iTunes and other stores on the 19th of June, 2015. Paul Drynda and Daniel Bolinger, the faces behind the Dry & Bolinger moniker, are not new to the Milk & Sugar Recordings environment, having already signed top-notch projects to their catalogue, such as ‘Tell Her’.

Aside from being one of Milk & Sugar Recordings’ favourites, Dry & Bolinger can also boast signings with numerous other A-list labels such as: Mother Recordings, Kittball Records, King Street Sounds, Tiger Records, USB Records and Emma Music. Having landed Beatport’s ‘Top 10’ chart with their very first effort, Dry & Bolinger have also been responsible for many other distinctive productions such as: Say You Care’, ‘The Soul EP’, ‘I Don’t Know Remix’, ‘Rumors & Lies Remix’ and ‘Fell in Love Remix’ to name just a few.

Being one of Germany’s leading music exports, Dry & Bolinger have set the task to take over the electronic music scene, armed with their unique blend of House, Deep House, Nu-Disco and Indie Dance sounds and their efforts have not gone unnoticed. Along the years, the duo has managed to gain various press features, aside from massive support from some superstar names including: Pete Tong, Bob Sinclar, Purple Disco Machine, Mihai Popoviciu, Copyright, Sam Divine and Alle Farben amongst many others.

Their newest productions ‘Got Back’ and ‘Raise Up’ are seeking to add more weight to Dry & Bolinger’s resume. ‘Got Back’ hails typical House beats, Indie Dance influences, pumping vocals and subby bass-lines, creating a truly deep groove. Uplifting melodies collide with darker elements, building up a unique vibe, altering moods with precise dynamic control. Holding a number of surprises such as the saxophone fill towards the end, ‘Got Back’ is surely a potential contender for top chart positions in the months ahead.

On the other hand, ‘Raise Up’ is the fruit of a high profile collaboration between Dry & Bolinger and Stu Patrics. Driven by infectious beats, sub-frequency bass elements and Funky atmospherics, ‘Raise Up’ is certainly a remarkable addition to Milk & Sugar’s compilation. The vocal treatment on this production lies on a fine line between the melodic and rhythmic realms, displaying some smart processing. Just like ‘Got Back’, this single has a few surprises in store, displaying once again Dry & Bolinger’s edgy musical vision.

‘Got Back’ and ‘Raise Up’ have surely served the purpose of deepening the successful collaboration between Dry & Bolinger and Milk & Sugar Recordings. Building upon the reputation of its owners Mike “Milk” Kronenberger and Steven “Sugar” Harding, jointly known as Milk & Sugar, the Munich based imprint has been on a consistent rise.

Dry & Bolinger will once again be joining Milk & Sugar Recordings’ heavyweight roster, comprising names such as: Ron Carroll, Peter Brown, Ben Pearce, Redman, Oriano and Saccao to name a few. Dry & Bolinger’s team up with Milk & Sugar Recordings has been tried and tested and based on previous results, their latest partnership can only continue to improve on what has already been set.