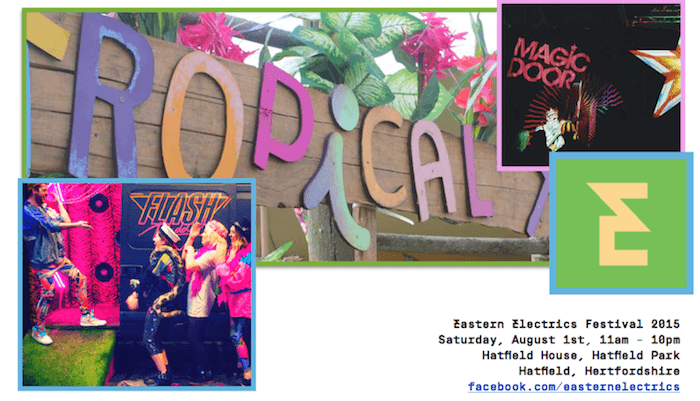 With the clock ticking until the doors open for the 2015 edition of Eastern Electrics Festival, the infamous party starters announce the full schedule of non-musical high-jinks set to take place on Saturday August 1st. Taking the madness to a next level, the EE crew are going all out with extra curricular activities, with secret raves and mischievous glitter-doused fun with Magic Door gang, plus Tropical Tea Parties, Funk School Discos and even the worlds first uglyproof photobooth Flash Daddy. With over seven years experience creating the baddest parties in the capital, Eastern Electrics this year will deliver full on debauchery and dress-up antics soundtracked by the house, garage and techno elite.

Unadulterated fun is the theme of the day, as Okuru Events present a paradise of light and colour with their Tropical Tea Party. Part rave and part cocktail bar, TTP bring a carnival vibe with palm tress, flamingoes and Hawaiian shirts. There’ll be no shortage of glitter as Birmingham faves Magic Door head to Hatfield with their brand of psychedelic disco, party experiences notorious for fancy-dress fun and guest DJs in secret locations.

For a souvenir like no other visit swag lords Flash Daddy at the ‘worlds first uglyproof photobooth’ for a makeover packed with gold, leopard print and spandex, plus a photo memory to take away. And for ravers wanting to get glam, lippy ladies Miss Lippy are armed with glitter pallets and paint brushes for all your beauty needs. Back to the music, By The Rivers bring a reggae and ska twist to the Electric City, plus Funk School Disco revitalise their parents vinyl collections with a spin on nu-disco and classic sounds.

Fast becoming known as the biggest celebration of house and techno in the UK, Eastern Electrics Festival unites the most celebrated artists from the underground across eight stages. The EE main stage brings groove master Joris Voorn, Panorama Bar resident Cassy, tech house don Matthias Tanzmann and Guti together for a global extravaganza, plus Nick Curly, FUSE bossman Enzo Siragusa and innovator Jamie Jones stepping up for the headline slot. Skream takes over the Big Top with a full crew in place for Skreamizm including  Boddika, Midland, Floorplan, Richy Ahmed, Jasper James and the man himself. Eastern Electrics institution The Switchyard will host tINI and her gang – Bella Saris, Delano Smith and Jichael Mackson, plus FUSE residents Seb Zito & Rossko and DJ collective Die Holländer from Berlin’s Club De Visionaire.

Eastern Electrics will be hosting TWO after parties, one in Hatfield ending at 6AM and one in King’s X London, going off until 10AM! More info here.

All Tickets are now almost completely SOLD OUT. Final Standard Tickets available at £59.95. VIP Tickets £79.95. These tickets will ALL sell out in advance of the show
easternelectrics.com | facebook.com/easternelectrics | twitter.com/eelectrics