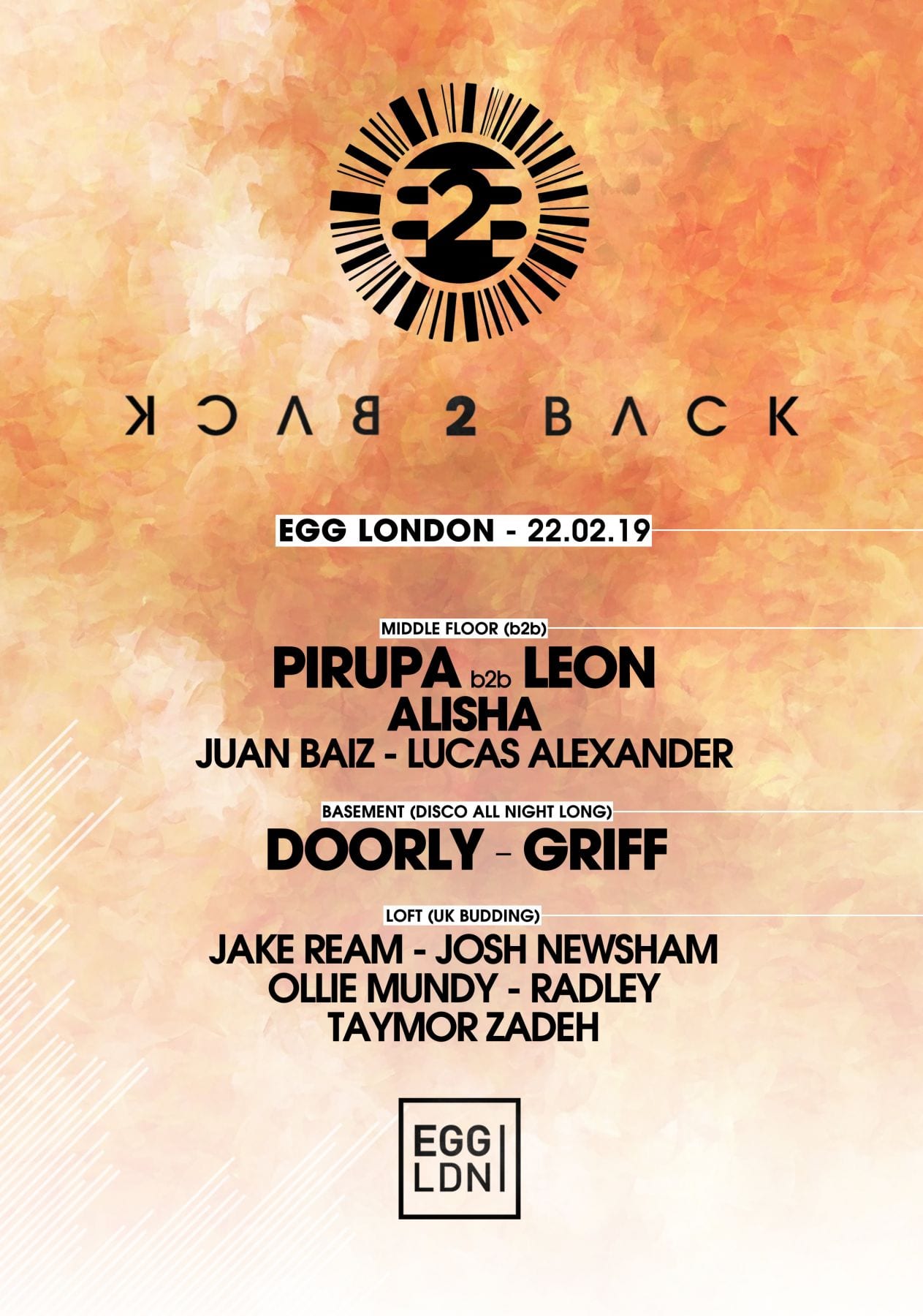 B2B is a bold new concept party that will take place at the iconic EGG London. Not only will the night deal exclusively in well-considered back-to-back sets, but it also offers a rare night of disco and fancy dress in the Basement, plus a carefully curated mix of up-and-comers in the Loft. The first party on February 22nd 2019 features Pirupa and Leon back-to-back, with Alisha, Doorly, Jake Ream, Josh Newsham and many more making it a mouthwatering debut.

This brand new, forward thinking night from Gavin Stockman and Juan Baiz is set to showcase thoughtful and tasteful back-to-back sets from the biggest names in the game. With a strict ‘no random pairing' policy, the party will play out on EGG’s middle floor and will deal in artists that have recently collaborated on a track or remix, so have a real musical kinship. As well as an exclusive back-to-back set from them, the rest of the club will be programmed by these passionate music lovers who will put their hours of meticulous research and an endless enthusiasm for freshness to the test.

The Loft comes under the UK Budding banner, and offers a platform for undiscovered talent from around the UK, all of which have also released music of their own, while in the Basement it will be a first for EGG: disco all night long with resident Griff joined by headliners,  with the first of those being Radio 1 stalwart, label boss, chart topping producer and globe trotting star DOORLY! expect an incredible B2B set from these 2 who are also going premiere a track that they have been working on especially for this event . What will make this an even more colourful affair is the fact that this room will be a place to indulge your wildest fancy dress fantasies and assume a different personality for a night of non-stop dancing. Boxes of costumes, props and fully themed decor will immerse you in a magical experience of the sort that EGG has never offered and take you back to the disco glory days.

Things kick off with hit making tech titans Pirupa and Leon back-to-back. The brotherly duo have released plenty of big tunes on the likes of Elrow Music and really know how to pump the party with their playful sounds. Joining them in room one is Kaluki newcomer Alisha, Juan Baiz and Lucas Alexander. Closing things out are some of the most exciting names in the scene who are all set to go on to big things, including Jake Ream, Josh Newsam, Ollie Mundy, Radley and Taymor Zadeh.

This new night brings something fresh to the London landscape and is sure to prove the most exciting new addition in some time.