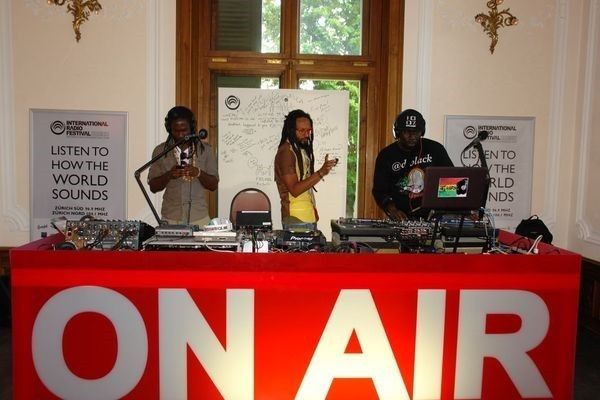 In just over 2 weeks some of the world’s best electronic music DJ’s will head to Zurich to broadcast their radio shows LIVE from Schloss Sihlberg castle from 4 – 8 September alongside other radio jockeys from all corners of the world giving people visiting the festival, their listeners back home, and online around the world, the rare opportunity to “Listen to how the World Sounds”.

6 Music – Derek May
This BBC-offshoot went on air in 2002 as a pure digital radio – with the purpose to play even more music in the shadows of the charts. Presenters such as Jarvis Cocker, Marc Riley (The Fall), Gilles Peterson, Don Letts, Guy Garvey (Elbow) and the son of John Peel, Tom Ravenscroft, have all graced the BBC studios in London and the station can claim without exaggeration to air the best programmes far and wide.

Of late a certain Derrick May also has his own slot on 6 Music. As a third of the Belleville Three Derrick, together with Juan Atkins and Kevin Saunderson are recognized as the originators of Detroit techno. His own track “Strings Of Life” (under the moniker Rhythm Is Rhythm) virtually represents the blueprint of this genre. May himself says about the style of music he created: “Techno is like Detroit, a complete mistake. It’s like George Clinton and Kraftwerk are stuck in an elevator with only a sequencer to keep them company.” We are looking forward to welcome a true legend. http://www.internationalradiofestival.com/derrick-may-for-music-6/

Ibiza Global Radio – Pacha
Whoever boasts of being Ibiza’s first dedicated music station is bragging quite a bit. But the 2004 launched Ibiza Global Radio actually really plays exactly the music the world is grooving to today and all the more tomorrow. The station’s DJs like Loco Dice, Dive Jess or Jose Maria Ramon are all the sort of free spirits which Ibiza is famous for and are always on cutting-edge when it comes to new electronic music.

“Pacha Ibiza Radio” is the weekly session on IGR by Ibiza’s biggest, most famous and most legendary club. Be aware: Pacha resident DJ AngelZ will kick some serious ass at our festival. http://www.internationalradiofestival.com/ibiza-global-radio-feat-pacha/

Ibiza Sonica – DJ Hell
Sonica participates now for the fourth time at the IRF. Ibiza Sonica sends the boisterous sound of the legendary party island to the whole wide world. DJs that shaped the Balearic music genre over the years broadcast from all kind of different clubs, open-air locations or the studio set amongst the rolling hills of the White Isle Ibiza – from Paul Oakenfold over to Pete Tong and Felix Da Housecat.

Igor Maijuan, CEO of the station, is accompanied by no other than DJ Hell to the 4th International Radio Festival. An establishment in global club culture with a larger-than-life personality which is nothing but infectious and rocks a party to the max. http://www.internationalradiofestival.com/ibiza-sonica-radio-feat-dj-hell/

Pioneer DJ Radio – Kissy Sell Out
Since last year, when Pioneer DJ Radio introduced itself at the IRF as a brand new web station, it became one of the most substantial opinion leaders of club culture. Their programme includes live broadcasts from happening clubs, label showcases and mixes/shows by the most popular DJs of the world.”

For example Pioneer DJ Radio most recently launched “Kissy Klub“. This is the programme that gained Thomas “Kissy Sell Out” Bisdee a committed worldwide following in no time! He was the first radio host to interview Skrillex and to broadcast the first Lady Gaga record over national airwaves. And when he simultaneously works the for Pioneer CDJ-2000 nexus decks (which he helped to develop) you almost won’t believe your ears, let alone your eyes. Mixmag described him as “one of the most exciting, charismatic and entertaining DJs of the decade”. More info here: http://www.internationalradiofestival.com/pioneer-dj-radio-feat-kissy-sell-out/

Hoxton FM – Normski
The underground of London’s East End has a new voice. Since 2011 Hoxton FM is the new playground for young and talented DJs, and prestigious veterans of electronic music. “The Show London” is a weekly report from London’s creative scene with interviews and coverage of fashion, art and culture; and naturally including a lot of wicked music, which you can’t hear like this anywhere else in the world.

The program is hosted by radio luminary Normski (he was the official voice of last year’s IRF) and Dan Formless (one of the three founders of Hoxton FM) always live from the Vibe Bar on Brick Lane welcoming guests, listeners and patrons to share the music, art, fashion and culture that inspires them. We’re anxious to hear what they have in store for us at this year’s IRF. More info here: http://www.internationalradiofestival.com/hoxton-fm-london/

The Radio Department – Armin van Buuren, John Digweed and Mark Knight.
The Radio Department specialises in delivering world class programming to over 350 of the best FM and digital platforms around the planet, every single week.  This year at the IRF there will be a selection of shows being broadcast from their current syndication roster including Armin van Buuren’s A State of Trance, John Digweed’s Transitions and Toolroom Knights with Mark Knight.  They will also be announcing their next project which is the global relaunch of Tiesto’s Club Life radio show, so stay tuned for more info. More info on the Radio department and their shows here: http://www.theradiodepartment.com

Find out more about the radio shows broadcasting from this years event here:  http://www.internationalradiofestival.com/

IRF B2B Forum
Running alongside the live radio shows is the IRF B2B Forum – a must attend for all those with a vested interest in the world’s most consumed medium: Music Radio. The Forum offers a unique platform to deliberate and collaborate, to network and to discover trends about their Industry. This year’s topics for discussion will focus on the “New Breed Broadcasting” and “Social Media Saved the Radio Star”. More info on the B2B speakers here: http://www.internationalradiofestival.com/b2b-forum/speakers-2013/

Registration:
The IRF B2B Forum is a must attend for all those with a vested interest in the world’s most consumed medium: Music Radio, plus the unique chance to meet pioneers from the world of radio and social media.
1 Day Passes: CHF175/day (walk-up cost CHF295)
2 Day International Day Pass: Thu & Fri, CHF275 (walk-up cost CHF425)
3 Day Full Pass: CHF375 (walk-up cost CHF550)

Your registration includes full access to the booked conference day(s), morning coffee and croissants, a light lunch, and networking drinks to round off the day. Register here now:

About the International Radio Festival (IRF):
Founded in 2010, the IRF is a Zurich-based organization and represents the FIRST and ONLY international radio festival of its kind, celebrating the world’s most consumed medium — Music Radio. A must-attend event, the IRF brings together Music Radio Anchors, Radio Programming Heads, Record Labels, Music Managers & Agents, Lifestyle Brands/Services and their Marketing & Advertising Agencies, Media Professionals and Educational Establishments. The IRF is the key place where the Music Radio world comes together to celebrate and showcase some of the best music programmes, to deliberate and collaborate, to network and to discover trends about their Industry. The IRF was chosen as a finalist in the 2011 British Swiss Business Awards, and invited by the Swiss Federal Government to be part of their presence during the 2012 London Olympic Games, and will be present too at the 2014 World Cup and 2016 Rio Olympics.

The 4th edition of the International Radio Festival (IRF) will take place from Wednesday, September 4 to Sunday, September 8 and will once again be held at the beautiful Schloss Sihlberg castle in central Zurich, Switzerland