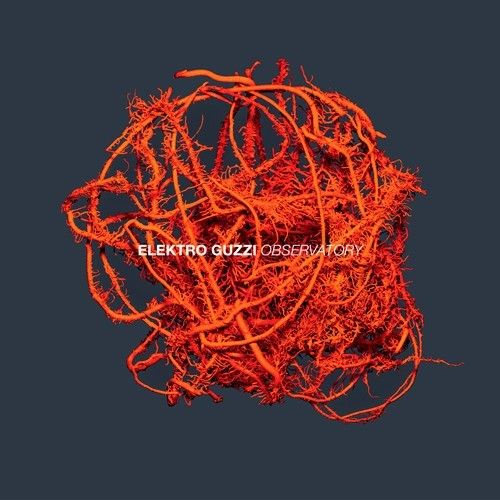 From their 2010 s/t debut album (“hauntingly beautiful” – Resident Advisor) and 2011 follow up ‘Parquet’ (“hypnotic, near kosmische reverberations” – Clash) Elektro Guzzi have taken their man-machine live show of bass, guitar, drums around the world, from landmark clubs like Fabric and Berghain to major festivals Roskilde, Sónar and Mutek.

With ‘Observatory’, Bernhard Hammer, Jakob Schneidewind and Bernhard Breuer shift everything anyone could expect from a live band. Tellingly, instrument credits have been wiped off the record sleeve. Still a string and a drum skin at the source, the sound emanating from the speakers seems to have travelled light years. Utterly alien, ‘Observatory’ unfolds into a paradigm for both the performance of music and the music performed.

Despite advances in software, ironically it is this live band that initiates a redesign of how techno could leap into the future. There is nothing retro about it. No citations of historic moments. The album tracks resemble a party on the edge of the solar system, with scraps of distant sound memories – a shocking abandonment of anything an instrument was supposed to do. The recordings’ warmth is at a stark contrast to the music’s Skynet thrust: a time capsule of techno projected into the dark unknown. Metallic and human at the same time, a love cry miles from home…