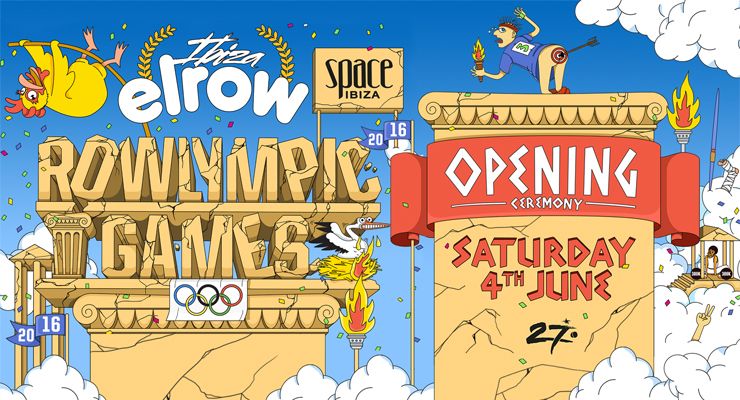 elrow will take over the entire club for the first time, offering a unique party experience in each room.

The last chance to enjoy the most sensational party at the legendary venue.

elrow begins the summer this 4th of June with the most anticipated party of the year, its renowned opening at Space Ibiza, with production inspired by the Olympic Games, specially designed for the occasion which will kick off the iconic Ibiza nightclub’s last season.

The staging of elrow’s last opening in Space Ibiza will flashback in time to the festive atmosphere of the Olympic Games of Ancient Greece and Rome, raising the heart rate of the audience with an explosive performance, in which original recreations of Olympic tryouts of the time such as combat, races, jumps and animal offerings to the gods will not go amiss. A selection of the best and most celebrated national and international artists (to be unveiled in the coming weeks) will head up the electronic acrobatics of the show.

This summer, for first time, elrow is taking over the whole of Space Ibiza, curating three spaces; the Main Room, like the in previous years, will hold the party’s main theme, Ker, its urban electronic music brand will soundtrack the summer nights at the infamous Sunset Terrace showcasing the cooler side of house music with a healthy combination of up and coming DJs as well as established artists, while The Terrace will host the newest concept party of elrow loaded with surprises, to be unveiled soon.

elrow’s last opening in Space Ibiza will shine like never before with its burst of color and extravagance, combining the atmosphere of fantasy, incitement and oddity with the best electronic music of the moment to give its audience an unbeatable sensary experience.

The tickets for the opening party are already available here