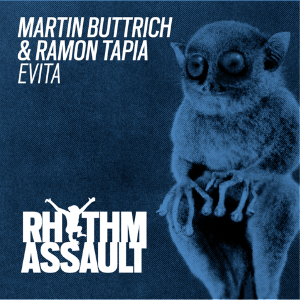 Respected producer and DJ Martin Buttrich is back with the latest track from his Collaborator series, this time teaming up with Ramon Tapia on ‘Evita’. Forthcoming on Martin’s own label, Rhythm Assault, the track will be available to purchase from Beatport on the 26th August, and will be available with all other retailers on the 9th September.

A thundering 8 and a half minute journey, ‘Evita’’s echoing synths, grooving sub bass and understated breakdown have made it one of the most popular additions to Martin’s recent sets.

‘Evita’ is the fourth Collaborator release from Martin, after the huge ’Perpetual’ alongside DJ Tennis, ‘Synchronicity’ with Mathew Jonson and ‘New Game’ with Guti. Look out for plenty more releases to come, with big names and old friends lined up to join Martin in the Collaborator series – the first project on new label Rhythm Assault.

Revered in the industry for his technical ability and creative vision, Martin Buttrich began his journey into electronic music in the clubs of Berlin at the dawn of the 90s. After first trying his hand at production at the age of 18, Martin began writing and producing for the likes of Timo Maas and Loco Dice, going on to cofound the now world renowned Desolat label with the latter in 2007. A skilled DJ, Martin frequently performs with respected underground promoters Circo Loco in Ibiza and beyond, as well as across the world at the likes of Berghain/Panoramabar in his native Germany, fabric in London, Womb in Tokyo, and Warung Beach Club in Brazil amongst many more. He began a new chapter in his career towards the end of last year, with the launch of his own solo label Rhythm Assault; the Collaborator series is just the start of this exciting new project.