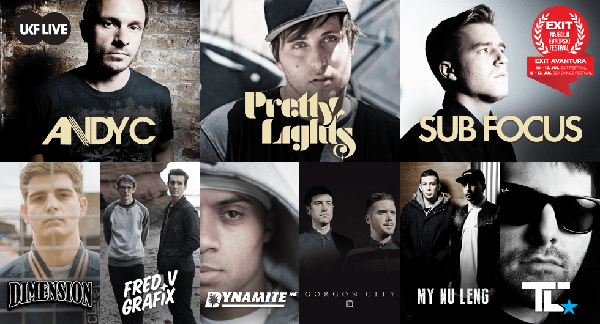 Brace yourselves for sheer sonic calamity with the most exciting names in bass music. From 1am to sunrise each night at the festival UKF will present the best in dubstep to drum & bass and electro to grime to keep you jumping all night long! Are you ready for this? UKF are coming for you!

A true scene ambassador and a producer, ANDY C is a label owner and razor-sharp selector; to many the Ram Records founder simply is drum & bass. Having achieved over 35 Best DJ awards and successfully launching the careers of household headliner names such as Chase & Status, Sub Focus and Wilkinson, his reputation as the premiere of D&B is faultless. Making his third appearance at EXIT on July 10, Andy C promises to set a whole new benchmark.

Joining Andy C on stage on July 10 is none other than DIMENSION. Signed to Cyantific’s new talent celebrating imprint CYN Music, he’s consistently blown the minds of both DJs and fans with each and every release so far. Destined for great things, the man behind massive anthems such as Digital World will ensure EXIT is kick-started with the raw bass energy it deserves!

FRED V & GRAFIX will be making their festival debut on July 11. Leaders of the British D&B new school, the Hospital Records duo are set to level-up this year with their debut album. Adding to their rich repertoire of crowd-melting cuts such as One of These Days, ‘Long Distance’ and ‘Major Happy’ they’ll be joined by an MC who’s been with EXIT Festival since its earliest incarnations… The charismatic entertainer DYNAMITE MC!

Saturday July 12 sees the arrival of GORGON CITY. Leading the charge in the UK’s latest chapter in house music, their lush blend of pop soul and driving grooves have already dented the UK Top 10 and have caused a dedicated fanbase across the globe. Their debut album is en route and promises to develop the momentum they’ve already achieved. Not to be missed; their debut at EXIT is guaranteed to loaded with sizzling exclusives.

GRAMMY nominated PRETTY LIGHTS is a bona fide beat pioneer. Currently at the helm of a next level live show, expect to be melted by his visuals and physically seduced by his characteristic hip-hop influenced live show. One of the most in demand men in electronic music, his debut at EXIT on Sunday July 13 will be one of the festival’s most emotional finales.

Sunday also sees the mighty SUB FOCUS return to EXIT. Last spotted destroying the Petrovaradin Fortress in 2012, he’s continued to develop on his impeccable profile with more genre-melting fusions. Most recently on his second album Torus. Transcending the limits of bass music by creating era-defining anthems, his DJ sets are both blisteringly technical and vibrantly eclectic. No one does it quite like Sub Focus!

Joining Pretty Lights and Sub Focus on the final day of the event will be TC. Promising to destroy our already rave-ravaged minds and rebuild them with unchartered levels of twistedness, TC is one of the most respected names in the bass music right now. Launching into the dancefloor’s consciousness in 2006 with the still-reload heavy Deep, his highly praised and meticulous work has recently scored him appearances on Skrillex’s OWSLA with Get Down Low uniting fans of D&B, dubstep, trap and beyond with its forward-thinking dynamics. Yet another incredible EXIT debut signed and sealed, TC’s performance will tear down the fortress walls!