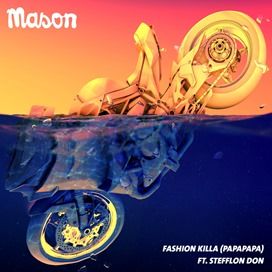 Turn on your TV this summer and your feet will soon be itching to dance. The ‘Papapapa’ instrumental version provides the jumping soundtrack for the new Deezer TV ad, while the vocal version immediately grabs you, as the soundtrack to the massive BooHoo summer TV ad campaign. The newly launched video shows a tongue-in-cheek scene from a hair salon where fashion statements are taken to the extreme! ‘Fashion Killa’ looks set to dominate the airwaves and tear up the dancefloors across all your favourite holiday destinations.

Mason first crashed into the mainstream consciousness with his international crossover hit 'Exceeder' in 2006 and hasn’t rested since. His productions have appeared on some of the coolest imprints out there, including Fool’s Gold, Great Stuff, Cheap Thrills and Boys Noize, as well as on his own widely respected label, Animal Language.

‘Fashion Killa’ is typical Mason; a genre-blurring, addictive groove with plenty of funked up happiness. Starting life as an instrumental with the insanely catchy, looping ‘papapapa’ vocal delivering shades of a young Michael Jackson, the track was soon crying out for a quality full vocal. Step up to the mic, Stefflon Don.

Hotly tipped as the UK’s answer to Nicki Minaj, Stefflon Don has risen rapidly through the ranks of the UK grime and hip hop scene. With a series of big tracks on the underground, including guest vocals on K Koke’s single ‘I’m Back Again’ and consistent support from the likes of SBTV and GRMDaily, Stefflon Don has a very bright future ahead. On ‘Fashion Killa’ she delivers a sure fire killer vocal, full of sass and attitude, bouncing off the music to take the whole track to another level.

‘Fashion Killa’ is the big summer tune sure to be stuck on repeat, in your head, and on the dancefloor, over the coming months.