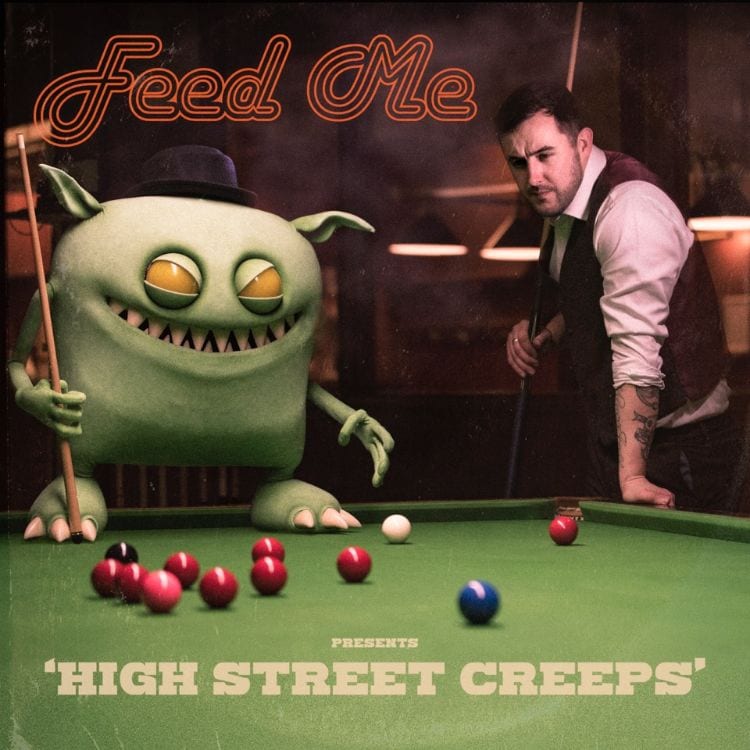 British producer and artist Feed Me – returns to mau5trap with his unique brand of hard-hitting, bass-heavy electronica for the release of a new full-length studio album, High Street Creeps. Set for release February 22 on deadmau5 imprint mau5trap, the album will be available for pre-save alongside a new single 'Feel Love' on February 8, followed by second single 'Sleepless' on February 15.

High Street Creeps— a namesake taken from the notorious 1980s Hertfordshire pheasant poaching ring–marks Feed Me’s second full studio album, following his 2013 debut Calamari Tuesday. Following up his debut with a string of Feed Me singles and EP’s, as well as a debut album for his alias Spor in 2015, High Street Creeps marks the producer’s sophomore full length project.

The album features 10 tracks which span a variety of production styles, some of which differ from what he’s delivered in the past.  From 'Feel Love' which features the angelic voice of Rosie Doonan (who has performed with the likes of Peter Gabriel and Birdy) to 'Sleepless,' which was almost entirely produced from a Eurorack modular, listeners can expect the unexpected from Feed Me.

In response to the long gap of time between albums, Feed Me states, “I'd amassed a lot of material since my last album, but it took a long time for me to feel like it was the right time to do another. My life had changed a lot since, I'd been through a lot of experiences and it felt overwhelming to try and condense a sprawling mass of feelings and ideas into a new story.”

About FEED ME:
Until he debuted his alias Feed Me in 2008, Hertfordshire, England-native Jon Gooch was known for his aggressive, hard-edged drum'n'bass productions as Spor. While Spor remained an ongoing outlet for Gooch, the producer quickly gained notice for his dubstep/electro-house hybrids as Feed Me; he signed to deadmau5's mau5trap label and issued “The Spell” (2008) and the album Feed Me's Big Adventure (2010), as well as the EPs To the Stars (2011) and Feed Me’s Escape from Electric Mountain (2012). He also increased his profile by remixing the likes of Chase & Status ("Let You Go"), Nero ("Innocence"), Gorillaz ("On Melancholy Hill"), and Robyn ("Call Your Girlfriend"). Calamari Tuesday, his second album, was released in 2013 reaching #1 in the U.S. dance charts followed by EP’s A Giant Warrior Descends On Tokyo in 2015, Feed Me's Family Reunion in 2016 and Feed Me’s Existential Crisisin 2017.