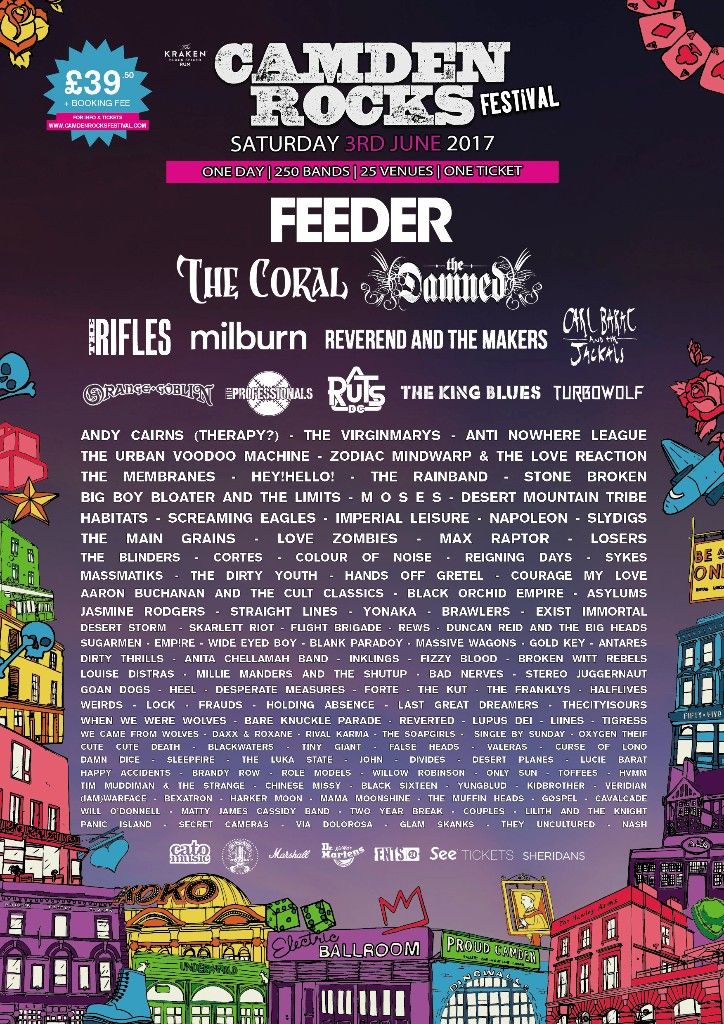 Camden Rocks Festival are thrilled to announce FEEDER as the headliners of this year’s festival, alongside another 30 bands today confirmed to join the line-up on June 3rd across 25 venues through Camden Town.

With a career including 25 Top 40 hits, over five million record sales, including three Platinum and two Gold albums, FEEDER returned from hiatus last year in tremendous style. Celebrating their highest chart position since 2008 with 9th record ‘All Bright Electric’, the album marks their 7th top 10 charting release, with critics hailing it as the band’s very best.

Speaking ahead of their performance, FEEDER frontman Grant Nicholas says:

“It's great to be playing Koko again as part of Camden Rocks Festival in my old haunt. I lived in Camden for over ten years and it's where Feeder got started and played regularly back in the early and mid-nineties. I remember writing many songs like ‘High’ and ‘Just a Day’ in my old flat on Camden Road, and some fun nights at Feet First, the Electric Ballroom and the Underworld. It's been almost 21 years since the release of Polythene, our first album, but Camden still holds a special place for us.”

Out now via Cooking Vinyl, high praise for ‘All Bright Electric’ came from:

‘Feeder rediscover their appetite, their attitude, and their bite' KERRANG

2017 sees the Camden Rocks Festival line-up growing bigger than ever, with the likes of The Coral, The Damned, Milburn, The Rifles, Reverend and The Makers, Carl Barat & The Jackals and many more topping the 250-band-strong bill, with further acts still to be announced. Alongside FEEDER, further line-up additions announced today are noted below in bold:

The current line-up for Camden Rocks Festival 2017 is as follows:

All tickets to the fifth year event in 2016 sold out and 2017 looks set to be no different. £39.50 tickets are now available from the link below subject to booking / transaction fees.