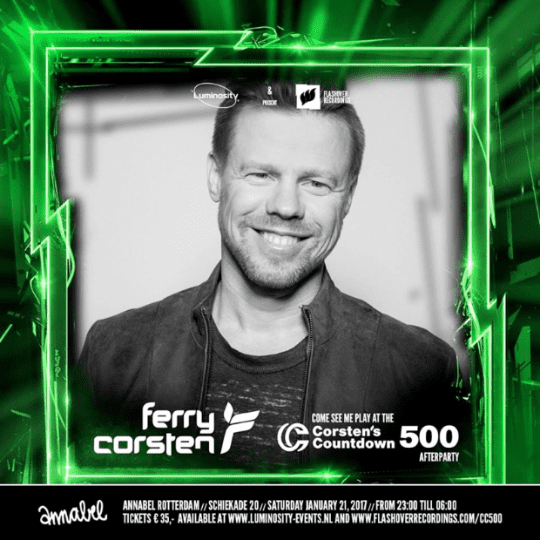 From 4pm CET fans from all over the world can celebrate this milestone with him and tune in via corstenscountdown.com, the Ferry Corsten Youtube channel, Di. FM, and a selection of the shows worldwide FM partners that include countries such as Argentina, Australia, Germany, Mexico, Russia, Spain and UK.

In this 8 hour show, Ferry will play tracks requested by fans from all over the world. Listeners are invited to mark their favorites on the interactive corstenscountdown.com website. Near the end they will be asked to submit their Top 3s. All combined, this generates the ultimate Top 10 that will be played by Ferry Corsten in the final hour of the broadcast.

Ferry Corsten and a selection of staring guests will all ensure the occasion is to one to remember. During the live broadcast, fans can also expect to hear exclusive interviews on the CC500 airwaves from the likes of Armin van Buuren, Markus Schulz, Cosmic Gate and many more!

After the live broadcast, Luminosity and Ferry’s Flashover Recordings imprint will be hosting an afterparty with a stellar selection of named spinners that include Giuseppe Ottaviani (Live 2.0), Robert Nickson, Solarstone and Stoneface & Terminal, as well as Ferry Corsten himself and a very exclusive Gouryella special set.

At 4pm (CET) on Saturday January 21st, come join Ferry Corsten and the entire Corsten’s Countdown family in celebrating the 500th episode of one of the scene’s longest running weekly radio shows.