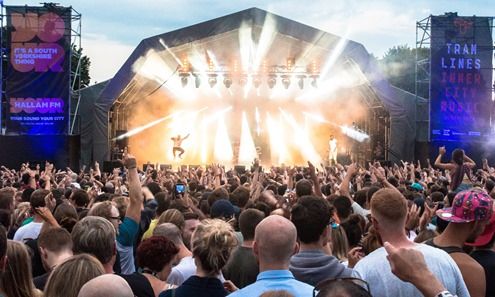 Due to popular demand, one extra date has been added to the Tramlines Festival official after party calendar on Sunday 23rd July at Foundry, Sheffield.

The award-winning, inner-city music festival Tramlines, has extended its official after party programme to now include an extra night of music, on Sunday 23rd July with a very special DJ set from disco funksters, Crazy P. Due to the popular demand of the previously announced after parties that take place on Friday 21st and Saturday 22nd July with the likes of Gerd Janson, Nightmares On Waxand Bugzy Malone, Tramlines will now allow festival goers to continue the party for one more night, with tickets priced at just £5 plus booking. Booking the Monday off work is now strongly advised by festival officials!

Party goers will be delighted at the addition of Crazy P, a seminal live act with many great albums and classic singles to their name. Made up of vocalist Danielle Moore and beat makers and live musicians Chris Todd and Jim Baron, they have been refining their own colourful, cosmic and sugary take on disco since 1995. Labels like 20:20 Vision, Paper Recordings and !K7 have released their music and the group have turned out show stopping performances at clubs and festivals all over the world.

This opportunity to catch Crazy P in the mix at Tramlines is special indeed… especially as tickets for this event cost just £5 plus booking fee and don't need to be purchased in conjunction with a full Tramlines ticket. Like all the other after parties, tickets will sell fast and with limited capacities, they won't last long. Head to www.tramlines.org.uk to purchase.

The beauty of the Tramlines After Parties is that each one is like its own mini-festival with local promoters Nice Like Rice, Off Me Nut Records, Tuesday Club and Wild Live all involved. The events are held across an array of the city’s finest venues such as theo2 Academy, The Octagon, Fusion & Foundry and Yellow Arch Studios, now spanning the entire festival weekend of Friday 21st to Sunday 23rd July.

As such, this unique metropolitan festival caters to all tastes and will offer big room raves as well as smaller, more intimate gigs. There really is something for everyone of all musical persuasions and of course the chance to discover something completely new.

The Tramlines Festival daytime programme is a melting pot of sounds. For 2017, Tramlines has a new-look festival site spanning three of Sheffield’s best parks and outdoor spaces. Lineup highlights include The Libertines, Primal Scream, All Saints, Metronomy, Kano, Toots and the Maytals, The Pharcyde, Twin Atlantic, The Coral, Loyle Carner and many more. With a three-day weekend ticket costing just £45 + bf, Tramlines remains – in its ninth year – one of the best value UK festivals around.