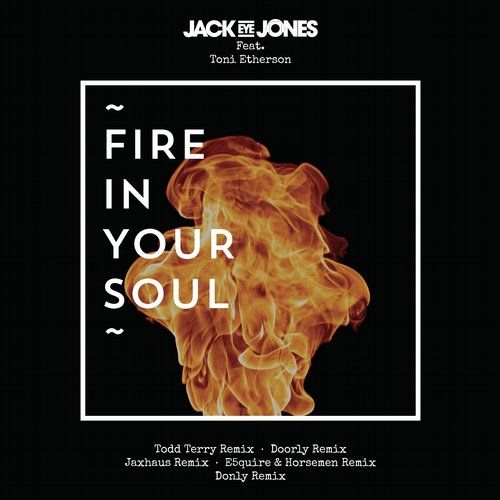 Jack Eye Jones begins 2016 in stellar form with his latest smash Fire In Your Soul! What a previous 12 months it was for the enigmatic Scotsman. His debut album landed right bang in the middle of the UK charts breaking through at number 3 on the iTunes Dance chart before finally settling at 15 on the BBC Dance Album chart the week ending October 16th, the track also received widespread support from djs and radio jocks alike thanks to some addictive hooks and reliably excellent production.

Never one to rest on his laurels, Jack has wasted no time in bringing his latest single to fruition. Fire In Your Soul is an instantly recognizable jam from a man with a penchant for enticing vocals. Its driving bassline underpins an emotion laden melody and an outstanding vocal performance from fellow Scot Toni Etherson. In what has been an underlying theme on Summer Nights, Jack once again gets the most out of contributors with Etherson showing just why she is on of the UK’s foremost talents right now.

It’s a diverse remix roster that has certainly caught the eye for this release. Legendary House heavyweight Todd Terry makes his IBZ Records debut with a phenomenal rework, his dark twisted basslines providing the perfect compliment for Toni’s dulcet tones.Alongside that is a prime remix from an emerging force in Jaxhaus. The mystery man combines delicate chords with a powerhouse baseline for a thumping future house rendition of the lead track. Also in the mix is LA based producer Doorly, who’s channels his garage energies for a beastly dancefloor orientated rework. Next up is the well respected pairing of E5quire & Horsemen who have produced tropical groove based, trap tinged belter that should satisfy those looking for something that bit heavier. All in all a remix package that is a statement of intent from Jack and his IBZ crew for the coming months.

The full EP is out now exclusively on Beatport.