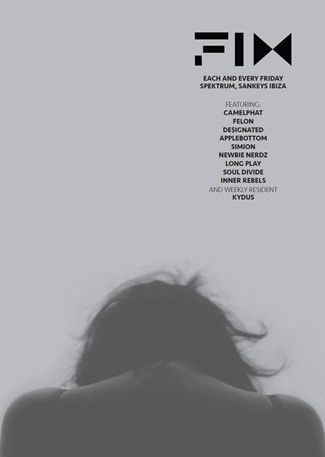 As the Manchester powerhouse Sankeys approaches its fifth season in Ibiza, it welcomes a new brand to its underground hub by the name of FIX. Every Friday night from 22 May, FIX will reside in Spektrum (room 2) bringing to the floor the hottest new talent in house and techno, including headline summer residents CamelPhat, Felon, De$ignated, Applebottom, Kydus plus special guests and Ibiza resident DJs to be announced.

It would be safe to say that not only is Sankeys one of the most popular clubs in Ibiza, it is also one of the most important contributors to the island’s hard-to-capture underground sound. For summer 2015 it launches a new Friday night party Shelter, in conjunction with Ibiza Rocks, to showcase the freshest heads in the UK house scene. With FIX’s strong focus on emerging artists from the worlds of house and techno, it was only fitting that it was given the reins for the second room.

FIX has compiled an envious list of talent who are already making waves and have huge futures ahead of them. The first resident welcomed to Spektrum is tech duo CamelPhat, whose hit track The Act, garnered massive support across the dance music spectrum from Pete Tong to Adam Bayer and Steve Angello to Mark Knight.

Joining them are London house-groove trio, Felon, who’ve gained fans in Duke Dumont and Danny Howard thanks to their online smash Isla, which finally sees release this summer on one of the world’s biggest dance labels, Ultra Music.

Further adding to the bill is FIX weekly resident Kydus, who has positioned himself at the cutting edge of today’s rapidly evolving scene with support from major hitters such as Marco Carola, Carl Cox and Nic Fanciulli.

The UK’s formidable Black Butter Records signing Applebottom, will also play at FIX, fresh from touring with the label across the UK.

Completing FIX’s pick of in-demand talent is the young London duo, De$ignated. Sitting somewhere between UK bass and German tech house, they have been supported by a who’s who of the house and bass community, and most recently releasing a track alongside house music legend Roger Sanchez under his S-Man moniker.

The FIX events are set to add another dimension to Sankeys already huge platform. Get your FIX on at Spektrum, every Friday in Ibiza from 22 May to 25 September. Tickets are now on sale from https://sankeysibiza.info/

Register on www.fix-music.com for more details.

EVENT INFO
Fix at Spektrum – Fridays
Sankeys Ibiza
22 May 2015 to 25 September
12am -6am
Tickets: from €29 https://sankeysibiza.info / www.ibiza-spotlight.co.uk / www.skiddle.com