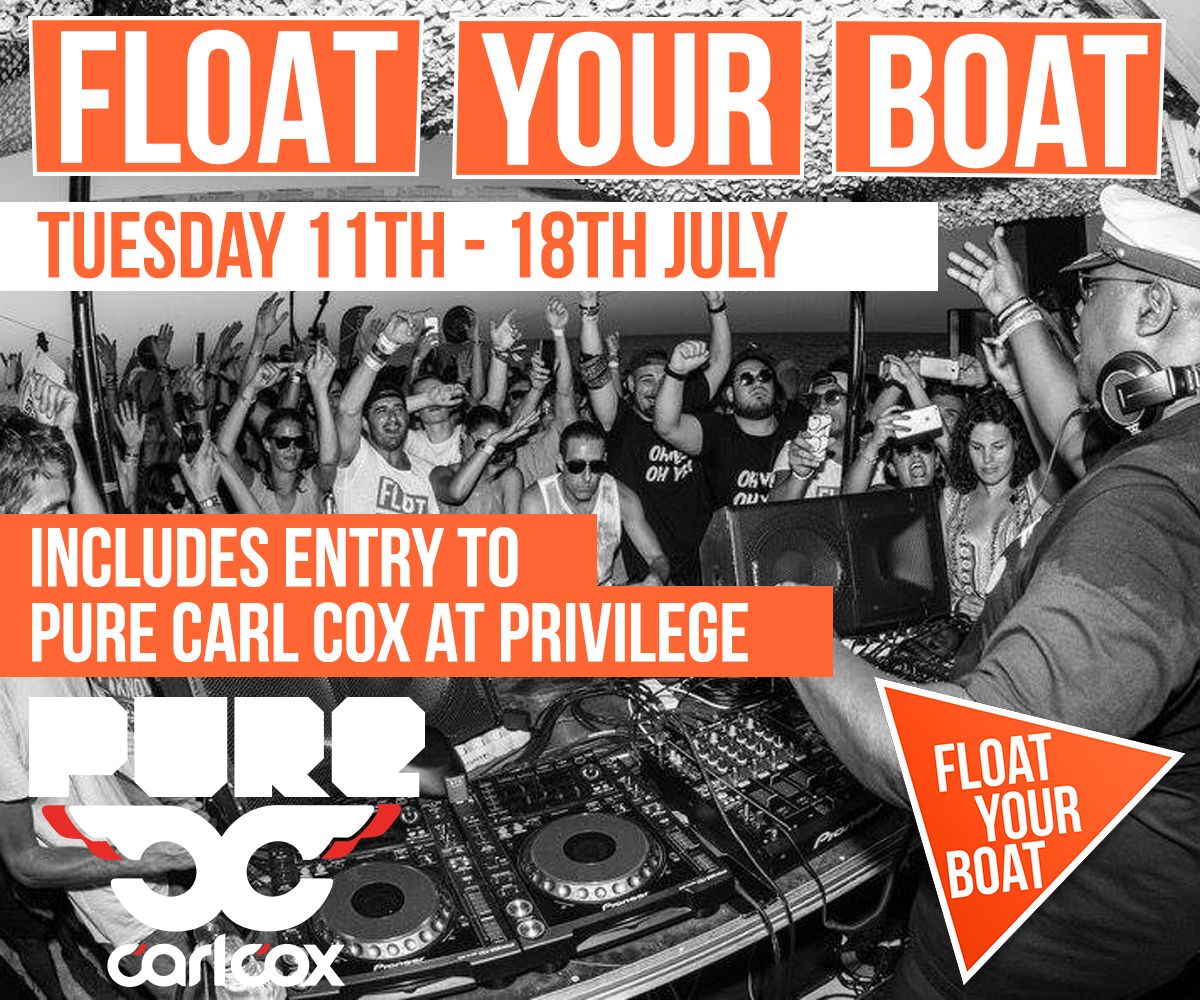 Float Your Boat is back for another season of incredible boat parties on the magical island of Ibiza. In the four years since first setting sail, FYB has quickly become the busiest and most talked about sunset cruise in Ibiza.

Continuing to bring you the biggest and very best boat parties, we are pleased to announce that Float Your Boat will be The Official Pre Party for “Pure Carl Cox” at Privilege Ibiza on Tuesday, July 11th and 18th.

Departing from San Antonio at 6pm, Float Your Boat takes you out for a three hour cruise filled with music and boasts crystal-clear custom Pioneer XY Pro-Audio sound system, new friends, big smiles, reasonably-priced drinks and a perfect view of the best sunset in the world. Providing the soundtrack of sexy Balearic beats will be our Ibiza resident DJs; Jason Bye, Andy Baxter and Clara Da Costa alongside some stellar headliners. The DJ line up for 2017 is still under wraps, but to give you an idea, 2016 saw artists such as Darren Emerson, DJ Sneak, Jon Rundell, Josh Wink, Pirupa, Stefano Noferini, Yousef and of course Carl Cox himself.

After this brilliant warm up out at sea, you will be whisked away with a free bus to head to Privilege Ibiza for Pure Carl Cox at the biggest club in the world, Privilege Ibiza as entry is included when you purchase a ticket!

We’ve had some great times amazing parties as the official pre party of “Carl Cox – Music is Revolution” and it was sad to see Carl’s 15 year love story with Space Ibiza come to an end but as one door closes, another opens and we are looking forward to the next exciting chapter.  This is a real game changer! Carl will bring his PURE festival vibes from Australia to the enormous main room of this epic arena and Carl has promised a full line up of raw, unadulterated techno and house to fill the venue.
Think rave, old school energy and pure clubbing anarchy then you might start to get a taste of what’s in store.

AND IF THAT DOESN’T WHET YOUR WHITE ISLE WHISTLE, NOTHING WILL!

We hope to see you on board soon!