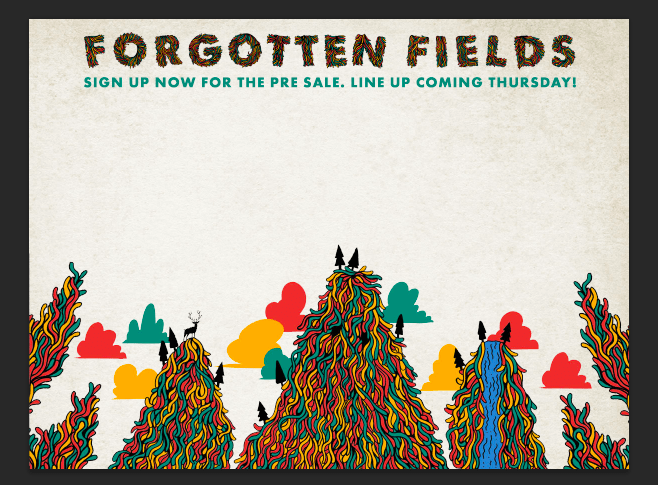 After the phenomenal success of its inaugural year, Forgotten Fields will be back in 2016 from the 5th – 7th August at the beautiful Eridge Park, Sussex.

Promising yet another year of sensational music, wondrous attractions and a plethora of activities for the whole family, Forgotten Fields will once again stand as the definitive British festival experience, combining the picturesque landscapes of East Sussex with the intimate atmosphere that made last year’s event such a highlight. Last year’s sold out debut year provided attendees with a weekend of entertainment from start to finish, all under the blossoming Sussex sunshine.

Indie legends Suede will be taking to the stage to take on headline duties. Having returned this year with the incredible album and accompanying film ‘Night Sports’, the seminal act, lead by true showman Brett Anderson and possessing an untouchable back catalogue, are sure to provide one of the most anthemic moments of the weekend.

Dublin quartet Kodaline established themselves as serious rock proposition with debut album 'A Perfect World'. Full of epic anthems and killer hooks it was one of the biggest selling debut releases of 2014 and their recently released ambitious second album 'Coming Up For Air' has taken the band to the next level, piling chorus upon unshakable chorus with teary, anthemic sing-alongs.  The record showcases a band at the top of their game and their headline slot is sure to be a Forgotten Fields highlight.

Also on headline duty, grime star, Dizzee Rascal is the ultimate festival showman and his legendary sets feature huge hits 'Dance Wiv Me', 'Bonkers', 'Holiday' and 'Dirtee Disco'. Expect an irrepressible mix of hip-hop, grime, garage and R'n'B from the Mercury Music Prize winner and an up-tempo party set that will have the festival hordes skanking all night long.
Undisputed R&B superstar Kelis will be on hand to provide the crowds with a typically hit laden set that’s sure to get crowds moving with airings of hit singles ‘Milkshake’, ‘Trick Me’ and ‘Caught Out There’. Geordie rock heroes Maximo Park also join the lineup, spearheaded by the dynamic and captivating vocals of frontman Paul Smith and with instantly recognisable anthems such as “Apply Some Pressure”, expect a non-stop barrage of art-rock gold. Systematically pioneering an entire genre with the iconic “Rapper’s Delight”, US hip-hop kings The Sugar Hill Gang stand as undisputed legends and their set at the festival is not to be missed. The lineup is bolstered by gritty Southampton rock trio Band Of Skulls, singer-songwriter Newton Faulkner, indie stalwarts Kula Shaker, Irish duo Hudson Taylor as well as Ibibo Sound Machine, Police Dog Hogan, Jack Savoretti, Milkychance and Too Many T’s.

This year Forgotten Fields will also be presenting a huge dance lineup for those wishing to take the party into the nighttime. With the full lineup still to be announced, the weekend already promises to be huge with the stage headlined by undisputed DJ legend Norman Jay MBE, drum and bass pioneer Shy FX, renowned turntablist DJ Yoda and breakbeat producer and DJ Krafty Kuts. Fans of all things dance need look no further!

Tickets are on sale from – http://po.st/FF16Tickets

Forgotten Fields is promoted by From The Fields, the creative minds behind Kendal Calling, Live From Jodrell Bank and Blue Dot.