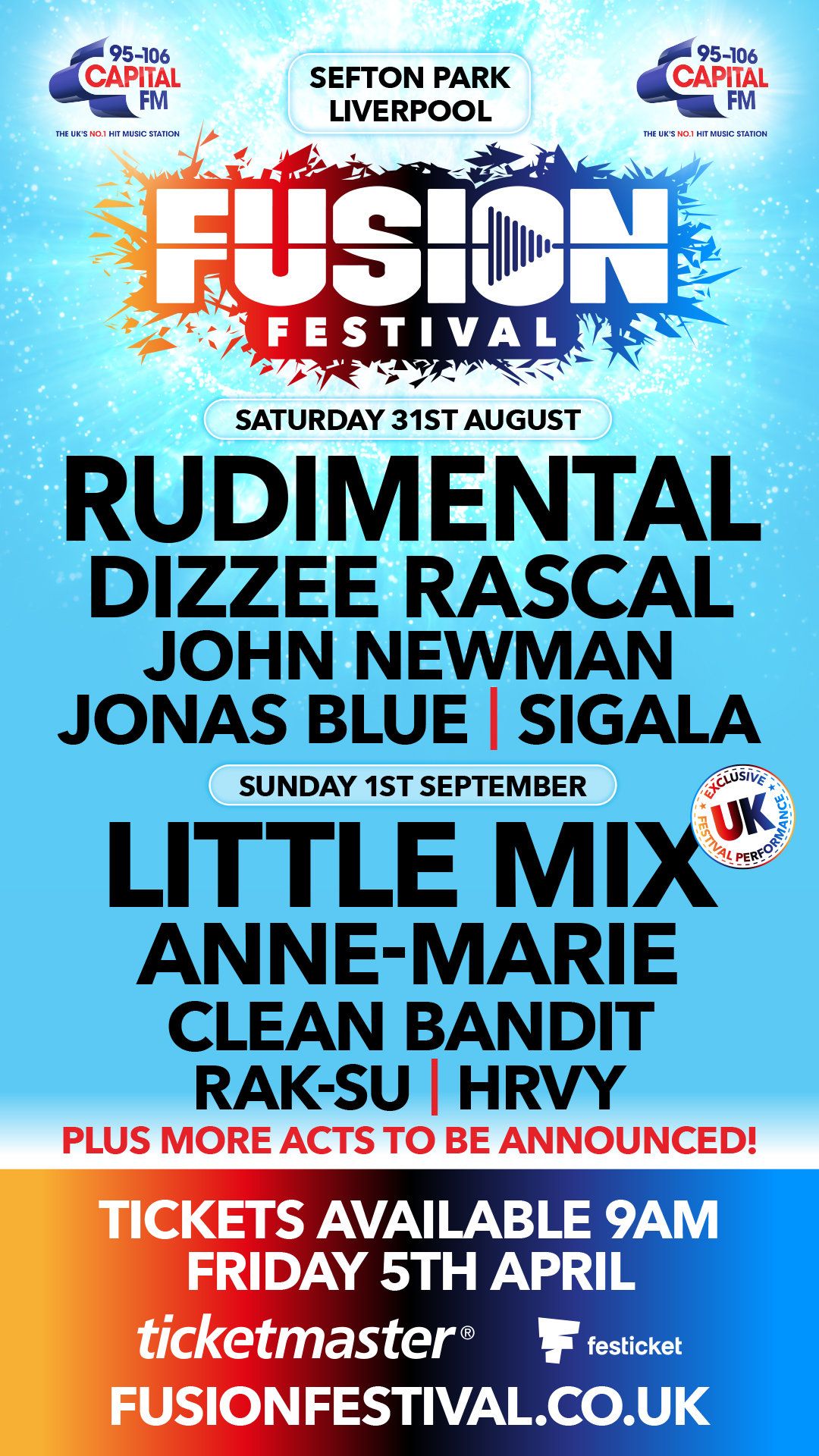 Liverpool’s Fusion Festival is thrilled to announce the first names for its 2019 line-up, with Rudimental headlining Saturday 31st August, and Little Mix topping the bill the day after on Sunday 1st September.

Ever since their iconic tune ‘Feel the Love’ debuted at the top of the UK Singles Chart, drum & bass act Rudimental have had a knack for turning out festival-ready anthems. Since their 2012 debut the party-starting collective have been nominated for a Mercury Music Prize, won a MOBO, a BRIT and released multiple platinum-selling singles and albums.

The biggest girl band on the planet, Little Mix, have been on an incredible winning streak the last few years. After being the first British group to win The X Factor in 2011, they’ve gone on to have four multi-platinum selling albums, nine platinum singles and four UK number ones – including bangers like ‘Wings’, ‘Black Magic’ and ‘Shout Out to My Ex’. Their appearance in Sefton Park will be a UK festival exclusive. They were front and centre at this year’s BRIT Awards, performing ‘Woman Like Me’ with Ms Banks and winning the British Video of the Year for the same song. They also recently scooped two public voted awards at the 2019 Global Awards for ‘Best Song’ and ‘Best Group’.

Speaking about their excitement about the festival Rak-Su commented: ‘We’re blown away by the calibre of artists playing at Fusion Festival 2019. We’re buzzing to be on the line up with people like Little Mix and Clean Bandit. Liverpool crowds are always awesome so we can’t wait to get on stage this summer.’

The Liverpudlian festival had its most successful year to date in 2018, with an all-star bill including Years & Years, Jess Glynne, Shawn Mendes, David Guetta and Clean Bandit amongst many others. Now in its 7th year, Fusion is again teaming up with the UK’s number one hit music station, Capital, to promise music fans the biggest pop anthems around.

The weekend festival recently announced a new site location for 2019, moving from Otterspool Promenade to a new, larger space in the magnificent Sefton Park.

Tickets for Fusion Festival will be on sale from 9am on Friday 5th April 2019.Ticket pricing (per day) below;

Tickets can be purchased from The Official Ticket Store:www.thefusionfestival.co.uk/festival

Local residents in post codes L8, L15, L17 and L18 will have access to a limited number of General Admission tickets at half price – £27.25 + BF (£2.95).
These resident tickets will be available on a first come, first served basis. To purchase the half-price tickets, please use promo code RESIDENT2019 on the following link www.fusionfestival.co.uk/residents