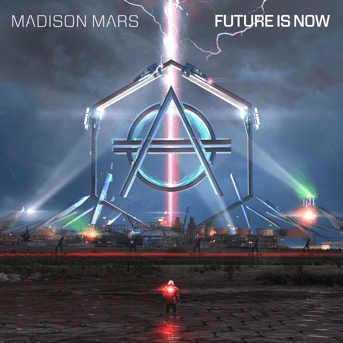 Madison Mars is bringing you in the right mood with his new tune ‘Future Is Now’. It is time to experience this new house banger filled with distorted synths, contagious melodies and energetic grooves. Don’t wait because the ‘Future Is Now’!

"Music from outer space" — that's how Madison Mars, a new highlight on the electronic music scene, describes his sound. Taking off massively with his debut single "Theme O" that was launched last year on Don Diablo's very own HEXAGON imprint, he has quickly proven his status of a new star to watch for with the follow up release called "Milky Way". Both releases have shown some fantastic figures combined, gaining 14,6 millions of streams across all the top platforms total!

April of 2016 rewarded the fast-growing audience of Madison Mars with two remixes: one for Sam Feldt's "Been A While" anthem and one for Tritonal and their club bomb called "Blackout". Madison seems unstoppable. His 4-track “Ready Or Not” EP saw the light in May (also released on HEXAGON) which was supported by most of the A-class DJs, blowing minds and dancefloors all around the world. Soon after his first EP another remix, this time for Melanie Martinez’s “Pity Party” was released on Atlantic Records.

Madison Mars’ newest stellar tune is called ‘Future Is Now’ and is out now on HEXAGON.

“‘Future Is Now' reflects entirely my passion for the future house genre, which in my opinion, always starts with the basics from classic house and later gets spiced up with modern synths and basses, flavored with vocal chops and other exciting elements. With the dreamy breakdowns and feel good house drop of my last single you get a good taste of the Future, which is happening now!”, explains Madison Mars.

Madison Mars – ‘Future Is Now’ – Out now on HEXAGON
https://madisonmars.lnk.to/FutureIsNow