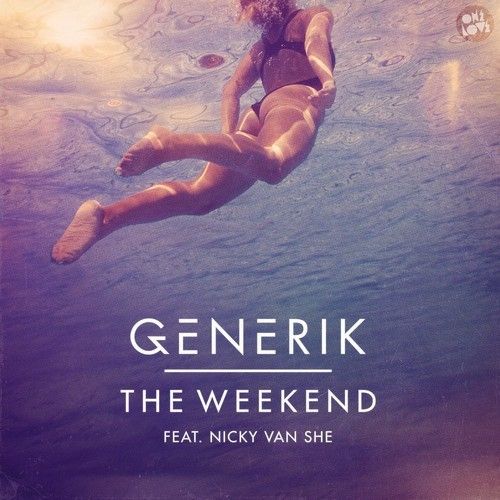 Released on leading Australian dance label, ONELOVE, The Weekend is the debut single from Tyson O’Brien a.k.a. Generik, Australia’s hottest new house producer. Already known for his sublime DJ skills, (not to mention his hard partying exploits) tearing up dancefloors from Melbourne to Monaco, The Weekend sees Generik emerge from the studio with proof positive that he’s a producer to be reckoned with. Add in a stunning vocal from Nicky Van She, front man for electronic pop pioneers, Van She, and you have a track destined to kickstart weekends everywhere.

Hotwiring hyperactive house with euphoric ‘90s rave piano and a sleek guitar solo, Generik’s maiden voyage into the studio reflects a natural talent, as well as the energy and finely-tuned ear for the dancefloor he’s developed during his 24/7 clubland adventures. Naturally, the track was born on a bender, which started in a London pub and spilled back to Nicky Van She’s house until all hours.“Nicky started singing the vocal into his phone on the train home,” recalls Tyson.  “We got home and started banging out the piano chords and the core of the track was made.”

The Weekend signals a pivotal point for Tyson. Since cutting his teeth at iconic Melbourne clubs like ONELOVE and SuperDisco, this self-confessed joker of the deck has become the ace of clubs. Armed with killer DJ sets and that famous 1000-kilowatt smile, Generik has earned his dues, tearing it up at highly respected parties including, the Bromance Tour alongside Brodinski and Gesaffelstein, Stereosonic Tour 2014, Big Day Out Boiler Room 2014, Coachella Villa After Parties (including designer Jeremy Scott), SXSW 2014, EMC closing party alongside Boys Noize andCajmere, the highly rated Alison Wonderland warehouse parties – the list goes on…

Generik always delivers on the dancefloor and together with his jet-setting, party punk style has earned the attention of DJ dons like Diplo, Skrillex and Calvin Harris.“I met Calvin at Stereosonic and we hit it off immediately,” recalls Tyson. “Then he asked me to tour Europe with him on his private jet and we did 13 shows in 11 days in 8 countries – it was insane!”

As for weekend tales, Tyson’s got plenty of wicked ones, as his tongue-in-cheek party hashtag #tourofcool attests. There are crazy Las Vegas parties, Paris romps and riotous shows in regional Australia playing to giant trannies, through to his last two-week trip to Ibiza, where he only slept for 27 hours…

However, it’s that quest for the perfect party that propels Tyson’s music and runs deep within The Weekend. In the studio, his wild side takes a rest as he brings laser-like focus to his music, drawing upon the infamous parties lived and loved, to create a soundtrack carefully designed to fuel the fun as the weekend draws near again.

Completing the package is the stylish house mix from much-hyped Belgian duo, Arches, plus a deeper, basshouse mix fromrising stars,Terace. As the man himself states in typical, no holds barred fashion, “I think if you put ‘The Weekend’ on and you don’t want to dance, there’s definitely something wrong with your brain or your ears.” Welcome to The Weekend.