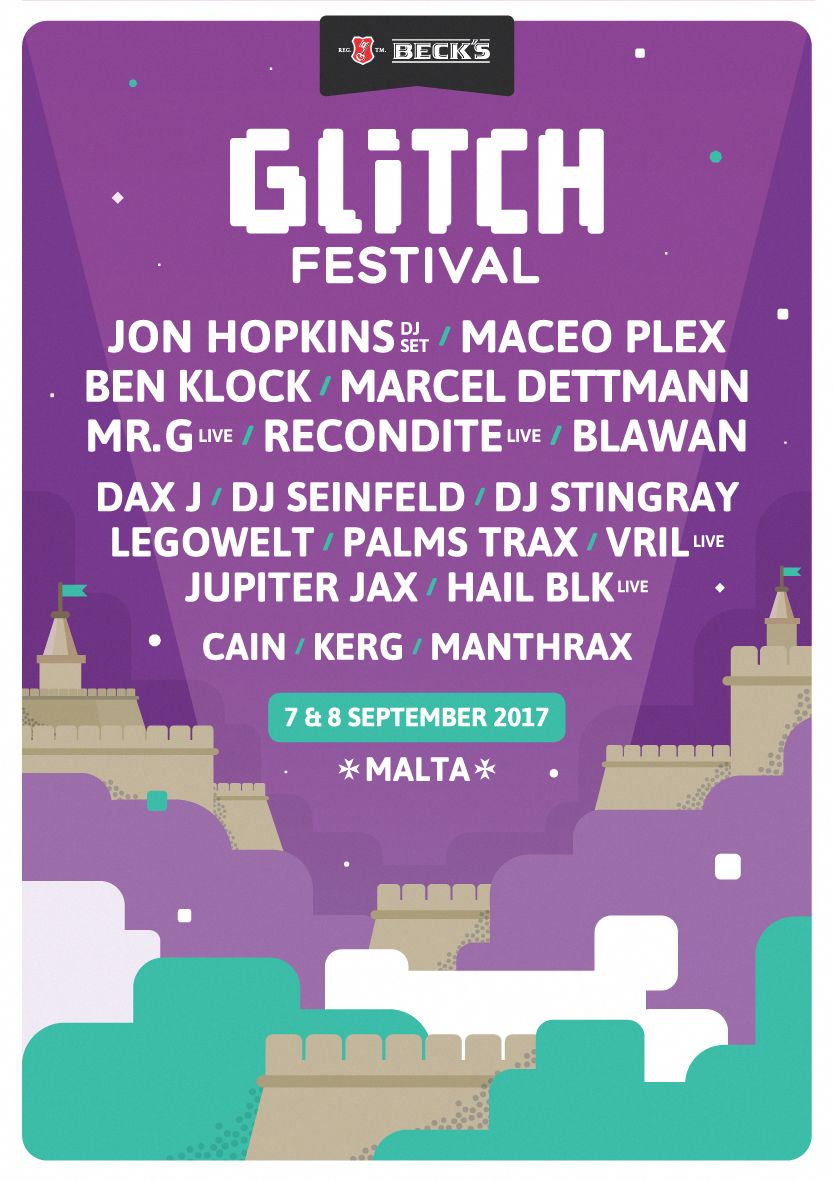 After 2016’s ground-shakingly successful debut, Glitch Festival is back with it’s second edition that unites a heavy bill of house and techno dons to play in its Maltese Gianpula Fields home, with Ben Klock, Maceo Plex, Marcel Dettmann, Jon Hopkins, Mr. G, Blawan, DJ Seinfeld and more set to soundtrack the sun-soaked weekender. This summer, electronic lovers from across the world will gather at the gates of the mystical house and techno fortress for a sonic adventure on the Mediterranean island of Malta. Set across the 7th and 8th September, Glitch is the only way to round off the summer, and what better way to end things? Expect a paradise setting, expert selectors and an intimate, family feel. Plus, it’s the ideal excuse to visit Malta for anyone who hasn’t made the trip before. A limited number of first release tickets are on sale now from around 59euro available here, and with flights from just £120 from most European airports, there’s no excuse not to be a part of Glitch Festival 2017.

Only the top tier of electronic royalty make up Glitch Festival’s solid-gold bill, exploring a library of sounds from darker, bass driven techno to soul-searching disco discoveries. Heading up proceedings is Berlin based techno powerhouse and Berghain resident, Ben Klock, with a stellar reputation for extended sets, and premium selections – ready to tear up the fort sound systems. Next up is another heavy-hitting name; audio maestro Maceo Plex, who’ll bring his trademark sumptuous house blends to the Glitch Festival arenas, then on fist-pumping, earth shattering techno duties is Marcel Dettmann, with a heap of industrial grooves. More left-leaning experiments come from the mesmerising Jon Hopkins, whose emotive take on modern electronica make him a must watch at Glitch 2017.

A true veteran and mainstay of the circuit, the enigmatic Mr G back catalogue reads like whos who of labels, and he as an artist has shaped the landscape for over two decades now, and he makes a very welcome addition, alongside Plangent Records boss Recondite. With releases on Ghostly International, Hot Flush and Acid Test, Recondite is a serious player in the techno game. Also heading to Malta this September is the indefinable Legowelt, who can easily journey between funk, techno, jackin house, disco and everything in-between in one of his usual intergalactic DJ sets. Breakthrough selector Dax J will present his jungle influenced techno too, with low-key euphoric noises from Dystopian affiliate Vril.

At the heart of what Glitch Festival does is to push the boundaries with eclectic and discerning programming, presenting a dream combination of established global talent and breakthrough newcomers. Two stars of last year that join us at Glitch Festival are Detroit lover Palms Trax, and the lo-fi phenomenon king DJ Seinfeld, both affiliated with ground-breaking UK label Lobster Theremin. Adding a touch of fun into everything they do, both sets are guaranteed to get Glitch Festival grooving. Rounding things off are dreamy composer Jupiter Jax, who melds cosmic techno selections with fuzzy, nostalgic disco sounds. Representing for the Maltese underground are Hail Blk, an artist who is driving the local movement into the public eye. This bill makes Glitch the gem in the Maltese festival crown. Partygoers can lap up the last of the summer sunshine against a backdrop of sun-kissed house and disco followed by darker, disjointed techno, acid and electro which will take the party through the night.

The 2017 edition of Glitch Festival will officially take place over the 7th and 8th of September at Gianpula fields, framed against the iconic skyline of Malta’s fortified city, Mdina. Glitch boasts one of the rarest venues to experience a festival, where party people are free to embark on a journey of discovery and adventure, all soundtracked by the most discerning crew of global talent there is on offer. With the glorious sunshine, guaranteed good vibes and a setting to rival any other festival, it’s the perfect combination of festival and holiday in one. With return flights at just £120 from London and most UK airports, there’s no better time to book your escape to Malta! For those making the pilgrimage, there are plenty of accommodation options in the local area, flights, apartment and ticket packages can be found through our partner Choice Holidays. The packages are very flexible, offering thousands of flights from anywhere around the world. There also various hotel options to suite your budget or preference.: https://www.glitchfestival.com/travel

Find the fortress. Find the Glitch.