Google opens the doors to the world-famous Abbey Road Studios 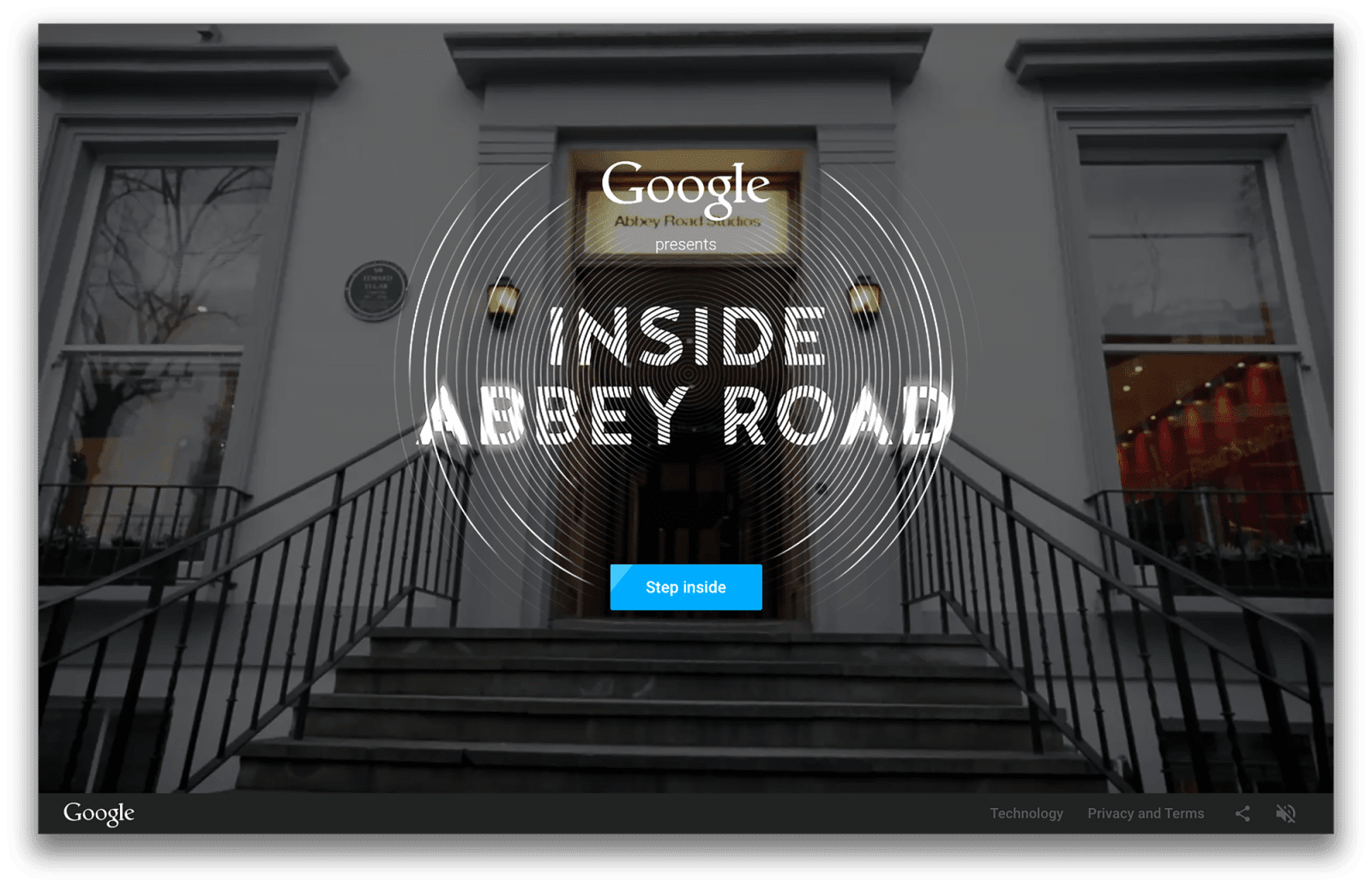 Google opens the doors to the world-famous Abbey Road Studios

Google is opening the doors of Abbey Road Studios to everyone for the first time.  INSIDE ABBEY ROAD is an interactive experience that lets fans around the world explore the legendary studios, hear its stories and play with some of its famous equipment right from their computer, tablet or phone.

Giles Martin, a producer based at Abbey Road for artists like Paul McCartney, had the pleasure of growing up at the studios where his father Sir George Martin produced The Beatles. He says: “Abbey Road Studios has been a hive of creativity and source of world-class recordings for more than 80 years.  The artists using the studios have sold countless millions of records and have helped create popular culture as we know it today.  It’s an inspirational place and an honour for me to work there today.  This collaboration with Google gives the outside world a great insight into the everyday workings of the studio and allows anyone to glimpse the magic that goes on inside the world’s most famous recording studio.”

Ever since 1931, Abbey Road Studios has consistently reinvented recording to create sounds the world hasn’t heard before. The studios hosted the world’s first live global broadcast (with The Beatles no less). They played a role in the invention of stereo by EMI engineer Alan Blumlein and countless epic and extraordinary moments in music have been created in Abbey Road Studios.

But until now, the famous crossing was about as close as most people could get to the studios.

INSIDE ABBEY ROAD is a new site created by Google and Abbey Road Studios which lets people explore every nook and cranny of the three main studios and one mastering suite for the first time. Throughout the site there are more than 150 different 360-degree panoramic images for visitors to explore. As they walk through the studios, they’ll see YouTube videos and archival images from Abbey Road’s history—right where they originally happened. From footage of Elgar and the London Symphony Orchestra opening the studios in 1931 to Jay Z discussing his Magna Carta album with Zane Lowe.

Users can play with pioneering equipment in specially designed interactive gadgets, such as the J37 4-track recorder that was used to record the Beatles’ Sgt. Pepper’s Lonely Hearts Club Band and learn about historical milestones such as how to cut vinyl in time for Record Store Day on Saturday 18th April.

There is also the option for users to join producer Giles Martin, engineer Mirek Stiles, the studios’ Head of Audio Products, or BBC Radio 6 Music presenter and Abbey Road recording artist Lauren Laverne for their very own interactive tour.

Select albums and songs featured in the experience will be available to download on Google Play via the discography sections in each studio in the tour.

Tom Seymour, the project lead from Google’s Creative Lab said: “We’re always looking at how we can use technology to bring people closer to cultural icons and institutions around the world. With Inside Abbey Road, we wanted to open the doors to the iconic music studio for anyone in the world to step inside and experience the stories, the sounds, the people and the equipment that make Abbey Road Studios what it is today.”

Abbey Road Studios’ Managing Director, Isabel Garvey said of the initiative, “We’re best known for some of the amazing music created at the studios but ‘Inside Abbey Road’ gives music fans- and musicians- unprecedented access to find out a lot more about the studio’s role in unleashing some of this creativity, whether that’s with legendary artists known all over the world or those just starting out.”

The site continues Google’s long tradition of creating tools which help the world see and experience people, culture and places they would never have had access to before. Whether visiting the Pyramids of Giza in Google Streetview, or getting up close to the brush strokes of Van Gogh in Google Cultural Institute.

INSIDE ABBEY ROAD is accessible via desktop, tablet and phone: g.co/insideabbeyroad