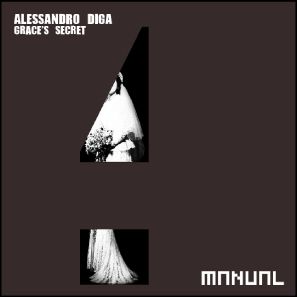 The stars are aligning perfectly to indicate that this will be a very exciting year for rising Dutch DJ/Producer Alessandro Diga. With his stunningly dynamic, deeply melodic and stylistically diverse 'Figments Of My Imagination' debut artist album waiting in the wings — an incredible listening experience to behold and not one to be missed — Paul Hazendonk's Manual Music have chosen 'Grace's Secret' as a first introduction to the plethora of aural delights that are to come.

Alessandro Diga's innovative, bold, vivacious and essentially melodic music will already be familiar by fans of the Manual, Sudbeat, Outside The Box, Perspectives Digital and Particles labels. His highly original creative style perhaps owes something to a musical background that saw him start with playing the trumpet and bugle as a youngster, before mastering the guitar and joining a punk band and then, finally, being sucked into the electronic music scene.

For Alessandro music is all about emotions. His prime creative challenge is to capture the emotions from a moment in time and embed them forever within his musical creations — no compromises, no obligations — just pure heartfelt honesty. This mindful insight will immediately join the dots for anyone listening to 'Grace's Secret' for the first time and wondering why they are so immediately enthralled by its seriously funked-up techno attitude as it weaves a wickedly hypnotic spell from first note to last.

Toulouse, France is hometown to THe WHite SHadow (FR), a producer born with a techno soul and the perfect choice as a remixer to playfully tweak the impressive original, up the energy levels and take proceedings further in the direction of its spiritual home — Detroit. With previous highly rated outings on Einmusika, Katermukke, Crossfrontier Audio, Suara and Nagual Research, he is a man on a mission and his remix for 'Grace's Secret' is pure fire.

Dropping the pace, changing the scenery and illuminating Alessandro's ability to continually enthral comes 'Skies Are Crying', a suitably moody and melancholic gem of compositional elegance that neatly blurs the boundaries that truly great electronic music so often does so well. A fact that fellow Dutch DJ/Producer Emiel van den Dungen (TachundNacht / Ploetzlich Musik) understands so well as a creator of his own distinctive style of timeless, hypnotizing, melody rich electronic music. His deeply beguiling interpretation of 'Skies Are Crying' is a perfect finale to an already essential selection here.

With the release of Alessandro Diga's 'Figments Of My Imagination' LP looming large on the horizon, this is a teasing taste of the exceptional music that is to come. With an album release tour of Holland being prepared throughout May and June, and highly collectable, limited edition CD copies of the album being pressed, another exciting chapter in Manual Music's meticulous history is about to unfold.