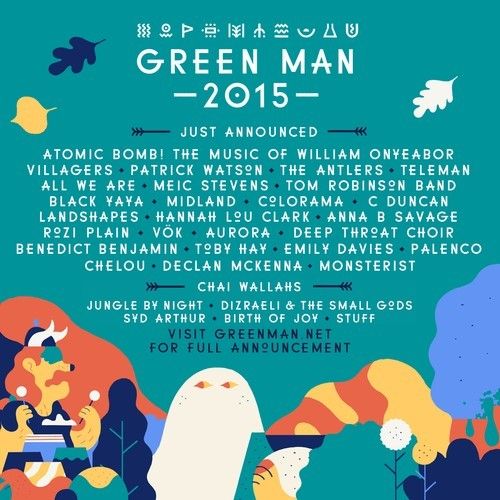 Calan Mai! In what is shaping up to be an unforgettable year, we are pleased to announce a host of fantastic new acts for Green Man 2015!

First up, we are thrilled to announce ‘Atomic Bomb! The Music of William Onyeabor’ will be bringing the party to the Mountain Stage on the Friday night. Atomic Bomb! celebrates the music of enigmatic Nigerian synth-funk pioneer William Onyeabor and is performed by the Atomic Bomb! band featuring a constantly revolving collective of internationally acclaimed musicians.

Making a welcome return to Green Man this August are Villagers – with the Black Mountains as your backdrop, where better to take in Conor’s poetic and wistful alternative folk?

We are also delighted to welcome Meic Stevens, the Welsh singer-songwriter often fondly referred to as the ‘Welsh Dylan’!

Our inimitable festival atmosphere has always left Green Man guests with hazy, happy memories, and this year will be no exception. Experienced vibe-setters Chai Wallahs are delivering the goods with a heady mix of live acts and DJs from around the globe – including afrofunk nine-piece Jungle By Night, Dizraeli & The Small Gods, Birth of Joy and psychedelic jazz quartet Syd Arthur.