HAAi - Growing Up With Muscle Cars 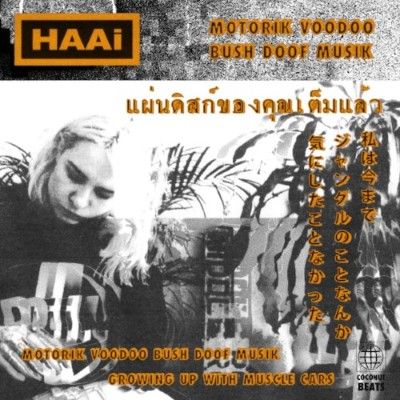 HAAi - Growing Up With Muscle Cars

After a string of standout track releases on her label Coconut Beats, HAAi is now preparing to unleash her first ever full length EP under the moniker. The lead track 'Growing Up With Muscle Cars' is now available to stream on Soundcloud.

Speaking about the EP, HAAi says: “This EP was made after I realised that what inspired me most was to combine my love of electronic music with the music I enjoy outside of the club. I decided to collaborate with friends from a couple of my favourite bands, including Fay Milton (Savages) who provides live drums on Motorik Bush Doof Musik and Taigen Kawabe (Bo Ningen) who performs on I Never Cared That Much For Jungle. For me, having live instrumentation on the EP adds an extra depth to the tracks & has given me a vision of how to I’d like future releases to sound.

My fave track off the EP, Growing Up With Muscle Cars, is an homage to my step dad who repairs and restores old muscle cars. He also used to take me to the drags in my hometown when I was little. We would push the race cars out onto the track. Some of my favourite memz as a lil kid.”

‘Your Disk Is Full’ is an atmospheric EP opener, so much so that it’s become a favourite of Denis Sulta’s for opening his sets of late. Title track ‘Motorik Voodoo Bush Doof Musik’ raises the tempo with shimmering percussion and psychedelic looping foreign vocals over a propulsive sub bass, prompting fans to ask for IDs in HAAi’s recent mixes.

‘I Never Cared Much For Jungle’ features the distinctive vocals of Taigen Kawabe of Japanese noise band Bo Ningen. The echoey samples are paired with a heavy hitting jungle-influenced production tailor made for the larger clubs and festivals HAAi is increasingly playing. A dub version of this track is also included in the package.

‘Growing Up With Muscle Cars’ brings a climactic end to the EP. Over the course of over ten minutes, the ambient intro gives way to an emotive breakbeat, with rumbling sub bass and glitchy synths making for a rich, multilayered production.

The EP comes in the midst of a hectic summer for HAAi.  After an incredible reception at DGTL in Amsterdam earlier this year and storming performances at Nuits Sonores, Parklife, DJ Harvey’s Printworks party and Field Day, HAAi is gearing up for her own curated series of Coconut Beats International parties at Phonox. The residency will see her host the likes of DJ Nobu, Gilles Peterson and DJ Boring across the next couple of months, coinciding with her continuing Coconut Beats show on Worldwide FM.

Looking ahead to the rest of summer, HAAi is confirmed to open The Black Madonna’s ‘We Still Believe’ street party in August, and will be making appearances at Worldwide Festival, Red Bull Music Odyssey, Melt, Lost Village, All Together Now, Bestival and Pacha to name a few.